Forget, for a moment, about the grotesque amount of money and the murderous, wicked regime from which it comes because, if we’re being honest, you would be hard-pressed to find many major sports that don’t dance with the devil so it can line its pockets.

What about the golf? Was it good? Exciting?

Did the first tournament of the LIV Golf Invitational Series provide a portent into how the royal and ancient game can evolve and survive in this ever-changing world in which it’s no longer enough for fans to watch the world’s best golfers, but must also be entertained and engaged and have a hashtag to put on something with a DJ in the corner laying down some phat beats on new shapes?

The banners all around the Centurion Club rammed the mission statement down our throats: “GOLF BUT LOUD, WELCOME TO THE FUTURE, DON’T BLINK”.

OK then! With matchsticks propping up my eyelids so I didn’t miss any of the action, I fumbled around on YouTube over the weekend and found the link to golf’s loud future … 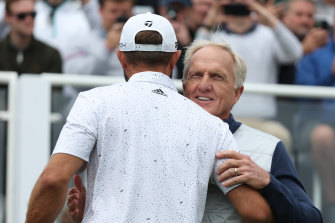 If you pay them, will they come? Greg Norman and Dustin Johnson at the first LIV Invitational golf tournament.Credit:Getty

“The evolution of the game has arrived!” commissioner Greg Norman beamed after South African Charl Schwartzel won the tournament, pocketing $6.7 million in prizemoney after leading from start to finish. “Golf was always going to be a force of good out of all this.”

You suspect Norman is subscribing to the George Costanza theory that “it’s not a lie if you believe it”. If he keeps saying things out loud, they will eventually become true in his own mind.

Speeding up play via a shotgun start, even shortening the tournament to 54 holes over three days, was a brave attempt to rectify the fact that golf tournaments are, indeed, quite time-consuming and who has time when you have the Instagram accounts of ex-partners to scroll through?

Being nailed to the lounge for four days is palatable, though, when the golf is actually quite good, or it has some sense of history attached to it instead of its participants just making loads of filthy cash. 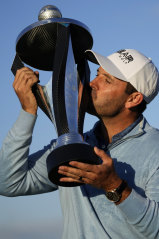 Charl Schwartzel with the trophyCredit:AP

On that score, Sharkie’s rebel league has a long way to go.

When Schwartzel wobbled on the back nine of his final round, things became kinda, sorta tense — but that’s about as exciting as it got.

I know: exciting. Presumably, in time, these teams will become golf’s version of Barcelona FC or the New York Yankees. Or, most likely, they will not.

The primary point of difference in the broadcast coverage was the real-time leaderboard that took up a quarter of the screen. Not only was it distracting and, on occasion, obscured the flight of the ball, it was also near impossible to understand for the casual observer.

According to various media reports, the vibe at the course was much better. Then again, most of the tickets were free, the beer was cheap, and the loaded fries loaded. There was a putting competition with the first prize a trip to Donald Trump’s course in Miami.

“It’s still just golf isn’t it?” one young fan, Connor McGuigan, told The Guardian. “The teams don’t matter and the golf has the feel of a kick-about. Loads of people are here to have fun and aren’t really watching the golf. It feels a bit like the Hundred [100-ball cricket competition] if I’m honest and there’s no chance I would have paid for a ticket.”

Golf’s ugly civil war isn’t just about players, past and present, lining their pockets with millions of petrodollars from the Saudis, who are using sport to obscure their deplorable crimes against humanity otherwise known, according to Norman, as “mistakes”.

It’s also about turning this grand old sport into a McHappy Meal; something that’s easily scoffed down while on the run in our very busy, important, time-poor lives.

Sure, it might fill a hole but, ultimately, it’s just making old Ronald McDonald filthy rich and, sooner or later, those pickles in the brown paper bag shoved behind the passenger seat of your car seat will begin to smell.

The problem is LIV Golf won’t just fade away, despite the PGA Tour banning players who have decided to take the money.

Tiger Woods can thumb his nose at $1billion to join the rebel league because he’s worth twice that amount, but other 40-something golfers on the back nine of their careers will gladly snap up every last dollar, no matter where it comes from.

One by one, the bigger names are joining the league with Bryson DeChambeau, Patrick Reed and Pat Perez joining Dustin Johnson and Phil Mickelson in the past week.

Four months ago, Perez was asked on Instagram by a fan if he’d ever join LIV Golf. “F..k no,” he replied.

Perhaps the only upside of golf tearing itself in half will be the dramatic subplot to all the four majors — The Masters, the US Open, The British Open and the PGA Championship — when golfers from whatever league come together and play for trophies seemingly as old as the oilfields of Saudi Arabia.

Should make for interesting talk in the clubhouse at Brookline when the US Open starts on Friday morning (AEST).

No need for matchsticks under the eyelids then. That’s golf we all want to watch.