Hannah Green will spend her third stint in Perth hotel quarantine hunting for a new house after a “life-changing” US$1 million ($1.37 million) bonus, which she says has relieved the financial pressure of weekly tournament golf.

The 24-year-old’s victory in the LPGA Tour’s season-long AON Risk Reward Challenge – which is given to the player who records the lowest overall score on designated holes at select events – even tops the annual salaries of the highest earners in the NRL and AFL. 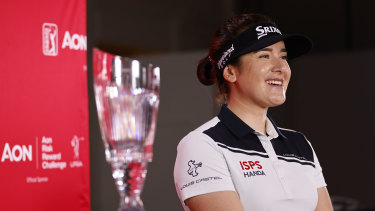 Hannah Green after winning the US$1 million bonus on the LPGA Tour.Credit:Getty

American Matthew Wolff claimed the US$1 million bonus on the men’s tour.

Green’s victory was confirmed last weekend even though she didn’t even play in the last event of the “strategy and decision-making” challenge, having failed to drop a single shot on any of the qualifying holes throughout the season.

“I haven’t even made that much money over two seasons,” Green said at season-ending CME Group Tour Championship in Florida.

“It’s still not quite sunk in yet. Coming down to the crunch I was nervous, it’s such a life-changing thing for us players. It gives me a little bit of comfort when I come out to play the [next] season.

“The market is so crazy in Australia. Every time I look online, a house I like is under offer within two or three days.”

“I wanted to buy a house during the off season. This gives me an opportunity to play comfortably. It’s quite difficult for me to buy a house in Australia, especially as a sportsperson with not frequent income and foreign income.

“The market is so crazy in Australia. Every time I look online, a house I like is under offer within two or three days.

“[But] I could almost pay my house off completely and not have a mortgage. It’s setting me up for after I finish playing golf and for me, it’s definitely life changing.”

Major winner Green has won US$2.3 million since joining the LPGA tour in 2018, showing just how significant the bonus is in the prism of her earning potential.

The Olympian, who just finished out of the medals at Tokyo despite a blazing back nine during her final round, had admitted the exhaustion of her first Games has affected a frustrating end to the LPGA season.

But world No.26 Green is hoping for one last strong showing in the United States before returning to Western Australia, which will require her to undergo the mandatory two-week hotel quarantine despite other states around the country slowly scrapping the isolation for returned travellers.

She spoke about her ambition to be the inaugural winner of the Karrie Webb Cup, which will feature a select field of 24 women’s players and be played alongside the men’s Australian PGA in January.

Asked about her Olympic Games experience, Green said: “It was really hot and humid, which are conditions I don’t particularly like because I grew up in Perth with such dry heat. It’s just different. It really took it out of me. It was an experience and definitely motivated me to hopefully get to Paris in 2024.

“I feel I had a really great start to this year’s season and since the Olympics I’ve been really flat. I’ve been working hard still and unfortunately things haven’t worked out the way I thought they would, which I guess is golf. I’m hoping to finish the season strong and celebrate when I come back home.”

Green’s close friend and compatriot Su Oh won a two-year lease on a Lamborghini of her choice after a hole-in-one in an LPGA event at Florida last weekend.