LIV Golf boss Greg Norman has hit back at Rory McIlroy following the Northern Irishman’s criticism of the Saudi-backed series. Since murmurings surrounding LIV Golf began, McIlroy – amongst others – has spoken openly about his opposition to the breakaway circuit that has been at the centre of the sport’s civil war.

Whilst others went back on their word and joined up with LIV Golf, McIlroy has stayed true, and has proven to be the PGA Tour’s player spokesperson amid the ongoing battle with the Saudi-funded setup.

Most recently, the four-time major champion took aim at LIV Golf when competing at the BMW PGA Championship at Wentworth. It was a dramatic week at the home of European golf, as it saw 18 LIV defectors making a controversial return to the DP World Tour.

Like many players who had pledged their allegiances to the tour, McIlroy was less than impressed to see the LIV rebels return, as he commented: “They are here. They are playing the golf tournament. My opinion is they shouldn’t be here, but again that’s just my opinion.” 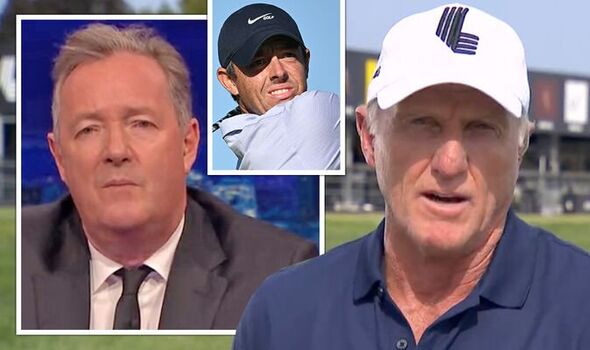 The breakaway circuit’s boss Norman has however hit back at McIlroy, accusing him of doing similar to players moving to LIV, when he headed to America to compete on the PGA Tour. Speaking on Piers Morgan Uncensored the Australian said: “Well, my message is, Rory, you’re an independent contractor. You have the right to make your decision.

“Remember, Rory started on the European tour. Then Rory decided to leave the European tour to go play where all the money is, where I went to play, to the PGA Tour.” McIlroy has made no secret of his disgruntlement with his fellow players who have decided to sign on the multi-million pound dotted line and sign with LIV.

In response, Norman hit out at the Northern Irishman for ‘begrudging’ those who have made the switch. He went on: “Rory, happy days, he can do what he wants to do. If he’s comfortable over there doing that, he’s an independent contractor, he can.

“If Rory wants to go to the Middle East and get appearance money to play in tournaments – happy days, go play in those Rory, that’s your choice.

“Don’t begrudge the other players for making a decision, that is a rightful decision under their independent contractual rights, to go and do it. It’s just a shame that people have taken this stance, when you look back over a period of time, they’ve pretty much done the same thing themselves.”