When Tim Tszyu steps into the ring against Jermell Charlo, he will do so against one of the sport’s few undefeated, undisputed champions, in their backyard.

The odds are seemingly stacked against the Australian; he has just overcome hand surgery, will be inactive for the longest period since turning professional and already has luminaries including boxer Errol Spence Jr and promoter Eddie Hearn predicting it is all too much too soon.

The fight will officially take place in the punting paradise that is Las Vegas, where the oddsmakers will install Tszyu as a rank outsider. It will mark the first time that “The Soul Taker” isn’t the favourite to emerge victorious in his 21-fight career. Not that he sees it that way.

“In my eyes, I can’t see how I’m the underdog,” Tszyu told the Herald.

“This is the definition of being great for me, this is it.

“People can doubt me all they want, the experts can say what they want. When we get in the ring, it’s me and him.

“I’m coming hunting with a spear. And the spears are my two hands.”

“I would say I am self-motivated anyway, I don’t need someone to tell me ‘You can’t do this’.

“I know what I’m capable of. I see this guy, OK, he’s a good fighter, he’s achieved this, he’s been a world champion since I’ve been pro.

Tszyu was holding court at Bondi Boxing Club on Thursday, where promoters No Limit revealed Vegas as the location of the January 28 clash. There was also confirmation that all four of Charlo’s title belts would be on the line for the anticipated showdown. 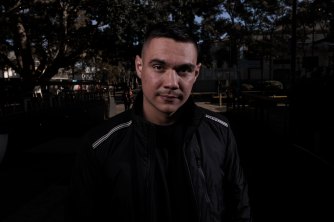 If the fight goes ahead at the MGM Grand, it will be the same venue and date that Tszyu’s father Kostya won his first world title, against Jake “The Snake” Rodriguez.

“Dad fought the 28th of January in Vegas at the MGM Grand in 1995 for his first world title,” Tszyu said.

“I’m in Vegas for the exact same day, 27 years later. If the fight ends up being at the MGM Grand, isn’t that just crazy?

“We are now at the very top, not just of boxing but of sport in general. This is the Superbowl, this is bigger than the Olympic Games. This is it.”

The shot at the undisputed title shot is the dream scenario for Tszyu; he gets his preferred opponent, for all the belts, in his desired location at a time that gives his surgically-repaired hands sufficient time to heal.

The clash is still seven months away, but the banter has already begun.

“I’m going hunting now,” Tszyu said. “He calls himself a lion, but I’m hunting the lion.

“Everyone has got a weakness, everyone has a breaking point and it’s all about exploiting that.

“Preparation for this will be key, my mindset is key. The game plan has to be 100 per cent spot on and it will be.

“I get all of that right, the fight doesn’t go the distance.”

Asked his message for Charlo, he replied: “I’m coming hunting with a spear. And the spears are my two hands.”

Meanwhile, Tszyu’s younger brother, Nikita, will fight against Jeff Horn’s sibling, Ben, in the “Battle of the Brothers” at the Hordern Pavilion on Wednesday. It’s part of a card that includes former footballer Justin Hodges taking on Jordan Simi.