Johnny Lewis describes it as a “gold rush”; a flood of Australian boxing talent the legendary trainer hasn’t seen since the days he guided Jeff Fenech, Kostya Tszyu and Jeff Harding to world titles.

“There’s no doubt that all of a sudden there’s an abundance of talent,” Lewis says.

Much has already been written about the rise of Tim Tszyu, and rightly so. If he retains his unbeaten record against Japan’s Takeshi Inoue at Qudos Bank Arena on November 17, he will be the mandatory challenger for Brian Castano’s WBO super-welterweight belt.

However, Tszyu is not flying the flag alone. Harry Garside, Jai Opetaia, Justis Huni, Brock Jarvis, Isaac Hardman and Moloney twins Andrew and Jason are just some of the rising stars on the local scene.

“Every one of those fighters you just mentioned is certainly capable of winning a world title,” Lewis says.

On November 28 (AEDT), George Kambosos jnr has the opportunity to do just that. When the Sydneysider steps into the ring against Teofimo Lopez, they are playing for all the marbles. Lopez is a global superstar, the holder of the WBA, IBF and WBO titles. If Kambosos can spring an upset at New York’s Hulu Theatre, he becomes the undisputed champion.

There is a wave of rising local talent and Kambosos believes he is on the crest of it.

“It’s good to see the young guys coming up, that next wave,” Kambosos says. “But it’s a big step from being good in Australia to being good overseas against the elite, the best of the best.

“It’s good to see Australian boxing is growing by the minute, and I know I am one of the main reasons for that – I’m the leader of the pack. 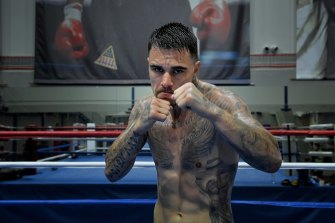 “I am the face of Australian boxing. But it is good to see the others as well.”

For the uninitiated, Kambosos appears to be an overnight success. However, only those who have followed his journey understand the lengths he has gone to get his title shot. The 28-year-old began his professional career fighting in front of a handful of punters at the Croatian Club, hustling to sell tickets to be able to focus on boxing full-time.

Since then, the fight game has taken him to far-flung destinations including Kuala Lumpur, Athens, England’s Wembley Stadium and throughout the US. The man dubbed “Ferocious” has come good on his mantra to fight anyone, anywhere.

“George went to the mountain, the mountain didn’t come to him,” Lewis says. “He’s really paid his dues over there. You talk about winning world titles; this kid is going in with a real superstar who holds the three belts, is unbeaten.

“This kid is jumping into the lion’s den. All I can say is that I like his chances, George. I wouldn’t be surprised if George brings those three belts home. There’s something about him, he’s very capable.”

In fighting so often overseas, Kambosos has gone largely unnoticed by the Australian public and media. Instead, a raft of other tyros have grabbed the headlines as they step in to fill the void left by the retirements of Anthony Mundine, Danny Green and Jeff Horn. 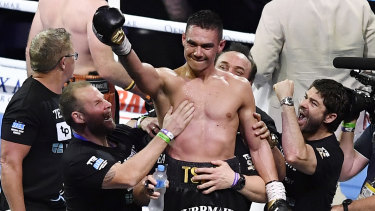 Tim Tszyu made the nation sit up and take notice with his win over Jeff Horn in 2020.Credit:Getty

Tszyu may now be the most recognisable local face, but when he started out he was playing second fiddle as an undercard fighter to footballer-cum-fighter Paul Gallen. Both men are pleased those roles have been reversed.

“I think they are the best promoters since the Bill Mordey era,” Lewis says.

As he prepares to make his professional debut later this month, Garside has the potential to attract a whole new audience to the sport.

“I’m not your stereotypical boxer and I love that,” Garside says. “The best thing about being human is how different, unique, versatile, beautiful and strange we all are. I’m definitely a bit strange, a bit different, a bit unique. It’s the 21st century, the more beautiful young people that come out and feel they don’t have to fit the mould, the better.

“There’s not some way they are supposed to act; you can be your true authentic self, and I support that 100 per cent.” 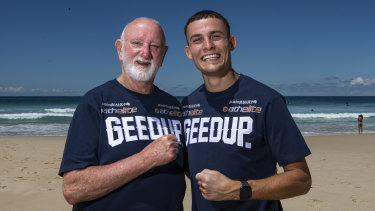 Garside’s personality is as unique as his talent. The 24-year-old paints his nails, mixes ballet with boxing and is both passionate and articulate in speaking about mental health issues. Boxing helped him become more comfortable in his own skin, and he encourages others struggling with their identity to take it up.

“You learn a lot about self-love, self-confidence; that’s what I took out of the sport,” he says.

“I’m the youngest of three boys and I always felt a little bit different from my two older brothers. They were a little bit blokey, really manly, doing blokey things. They were punching on, always out the back with dad digging holes or playing with power tools.

“I always felt different to them. I think the reason I started boxing was to gain a bit of respect. I fell in love with the sport instantly and it gave me some self-love, self-compassion and self-understanding.

“It gave me so many things that are invaluable to young people. It’s definitely changed the way I act, the way I present myself. I’m a lot more confident in myself in who I am. That is so important.”

Opetaia is another local to keep an eye on. The cruiserweight’s next fight is against fellow Australian Trent Broadhurst in Fortitude Valley on December 4. If he emerges victorious, his next assignment will be for a world title against IBF cruiserweight champion Mairis Briedis on February 5.

The plan is to rule the division and then go up to heavyweight, which could eventually result in a blockbuster clash with Huni – the only man to inflict a professional defeat on Gallen.

“He’s an awesome athlete; he’s so sharp, so sparring with him, it’s iron sharpening iron,” Opetiai says of Huni.

The last word should go to Tszyu. The son of hall-of-famer Kostya is proud of what he and his compatriots have achieved to date but believes there is an element missing before they gain respect on the global stage.

“We’re all up there as world contenders,” Tszyu says. “But we need world titles.”

The wait could soon be over.