Home » Fighting » What next for Chimaev after botched weight cut and another big win?

Khamzat Chimev is the UFC’s new super villain and has no issue playing up to the role.

The fearsome Chechen-born star obliterated Kevin Holland in the first round of their co-main event in Las Vegas on Saturday night with yet another ridiculous demonstration of his talents.

Much of the narrative surrounding the event was based around Chimaev, who missed weight for his match-up with Nate Diaz by seven pounds, leading to a massive shake-up of the card at the last minute. 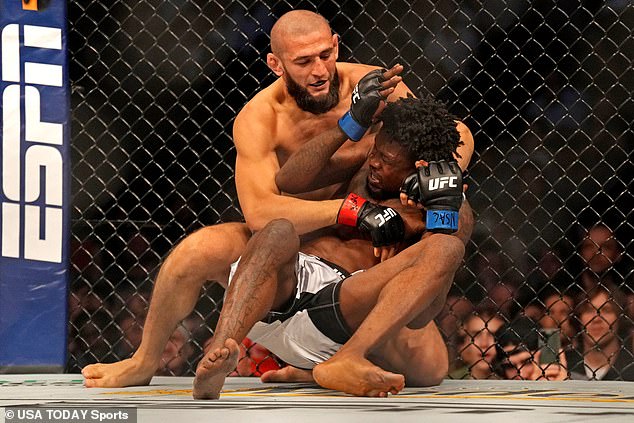 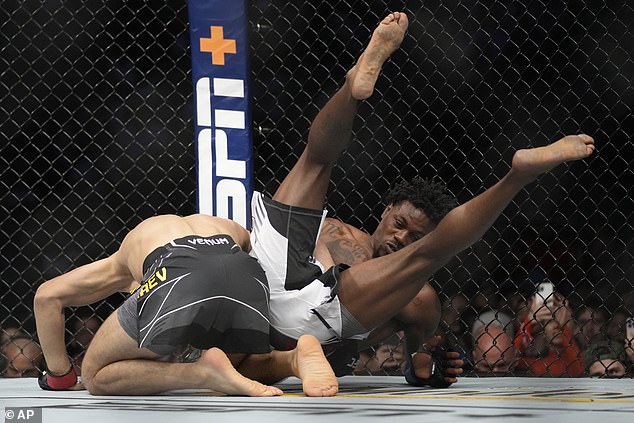 The fans inside T-Mobile Arena let Chimaev know what they thought of his lack of professionalism, roundly booing him for as long as the fight with Holland lasted.

But Chimaev is a picture-perfect villain and did not seem to mind at all, roaring into the mic: ‘So what now! Say something! So what now?’

‘I am the most dangerous guy here, I am coming for everybody. I’ll kill everybody.’

Other than a bloody and brutal encounter with Gilbert Burns, Chimaev has made all his opponents in the UFC look amateurish.

His relentless wrestling dominance has put him on the cusp of a title shot but now there’s real uncertainty surrounding his next move.

The UFC are planning for Kamaru Usman and new welterweight champion Leon Edwards to have a trilogy fight on UK soil early next year.

So while the belt is unavailable, it remains to be seen who Chimaev will take on next. 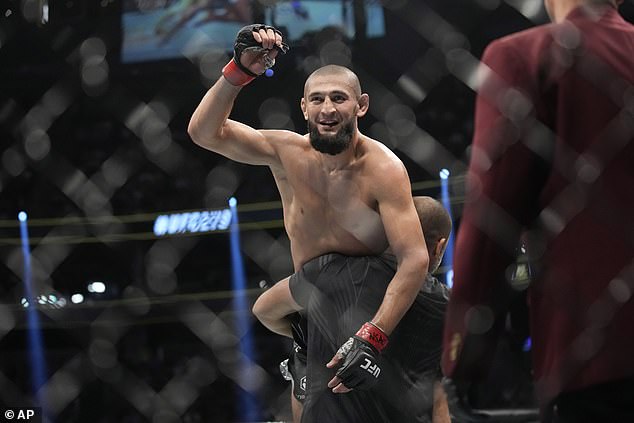 He is willing to fight anybody, such is the well-founded confidence in his ability but perhaps missing weight so convincingly will mean a move up to 185-pounds is inevitable.

If he chooses to stay down at welterweight, Colby Covington is a convincing option.

‘Chaos’ is in need of a big win to put himself back in the title picture and the UFC want to wheel him out before the end of the year.

Chimaev would also be able to handle a quick turnaround given the lack of damage he suffered against Holland.

Much will also depend on how keen the UFC are to give Chimaev another chance at welterweight, given the risk involved that the fight may have to be scrapped. 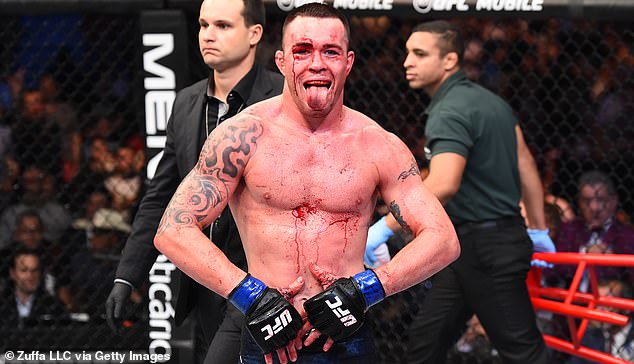 He is now a real star and calling off a huge fight at the last minute would be disastrous.

In the aftermath of Saturday night, White shared these fears, saying: ‘It’s a problem. That’s a problem that he missed weight. I don’t know. We’ve got to look at it and figure it out. What makes sense is for him to fight at [185 pounds], so we’ll see.

‘It is what it is. It happened. We’ll go back this week and come up with a plan and probably have him fight at [185].

‘After he just didn’t make weight, I don’t know,’ White said when addressing Chimaev’s future. ‘There’s a lot of possibilities for him. Possibly at 170 or at 185.’

That said, his coach Andreas Michael now insists Chimaev is not done at welterweight and pointed to him coming into camp too heavy without enough time to shed it all – while also blaming the after-effects of Covid.

White was still impressed by Chimaev at the weekend despite frustrations over his unprofessionalism: ‘I don’t know if anybody expected him to do exactly what he did.

‘You don’t know what to expect from that guy. This is like his fourth fight that he’s never even taken a punch. 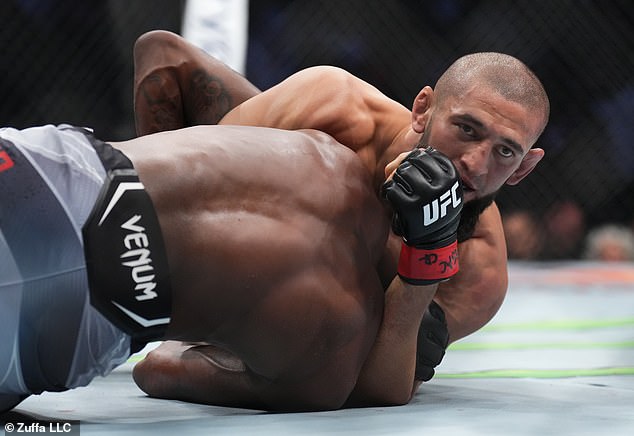 Chimaev has made no secret of his plans to move up to middleweight at some point. Champion Israel Adesanya is interested in the fight at some stage but only if he has some success in the division first.

‘Because guess what? He’ll bring in a lot of eyes. That’s how it all starts, those are the ones who are crazy enough to make it happen. He’s on his way, but show me something first.’

‘There was something he did in that fight, I won’t give it away, but I was like, “Hmm. I like that.” I was really impressed with. So, that’s what made me take notice of him properly. 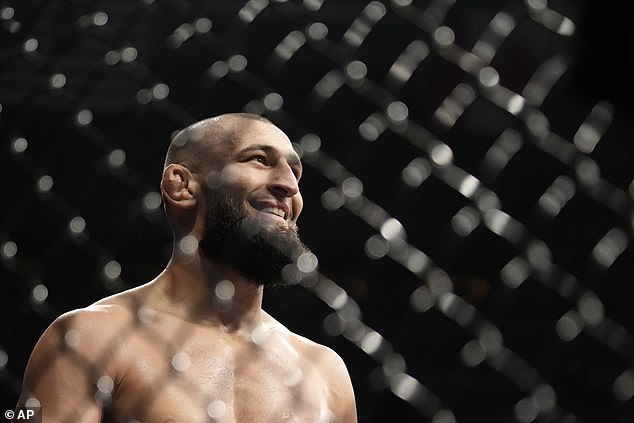 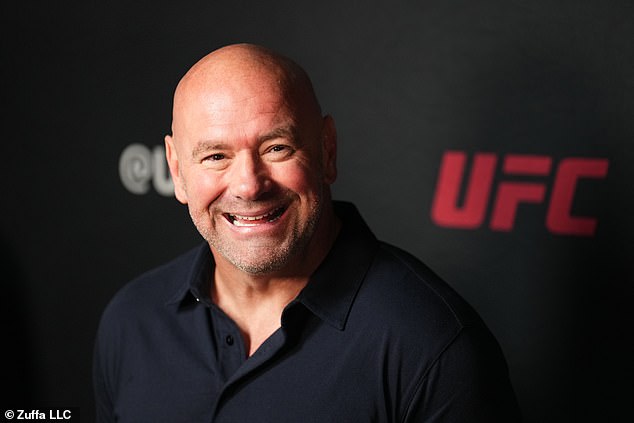 Robert Whittaker might be one solid option for Chimaev. The Australian has proved himself head and shoulders above everyone except Adesanya so would be a true test of the undefeated star’s mettle.

Whittaker just defeated Marvin Vettori and is talking about a move up in weight but Chimaev could breathe new life into the division and persuade him to stay.

Another option at middleweight would be Paulo Costa, who has thrown his hat in the ring to face Chimaev.

‘Guys who you can beat and be a bully, but I’m not. I’m a big one, I’m the biggest middleweight in the UFC so you cannot bully me. When you show up, I will be here, ready for you because you are a ‘Gourmet Chechen,’ you are a fake gangster so that’s it. 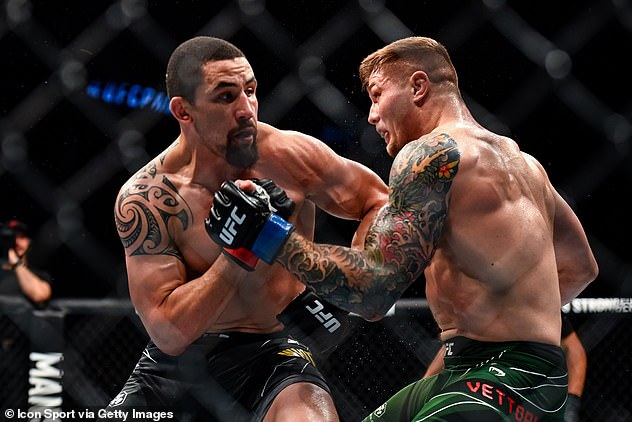 ‘I know this guy don’t want this fight. He will try and fight somebody else who has no grappling, no jiu-jitsu, no wrestling. I have nothing more to say about that guy. I’m fresh, I can fight him with just one hand because it’s broken, but I don’t care man.’

That broken hand means a fight in the next few months is less likely but it would certainly have the makings of an entertaining match-up on paper.

Before anything can be set in stone, the UFC need to sit down with Chimaev and work out if he can really operate at welterweight anymore.

If he decides to move up, that transition to shed weight and move back down will be all the more difficult in the future.

There are compelling fights for him in both classes so whatever Chimaev decides is his next move will be followed by a huge amount of interest.