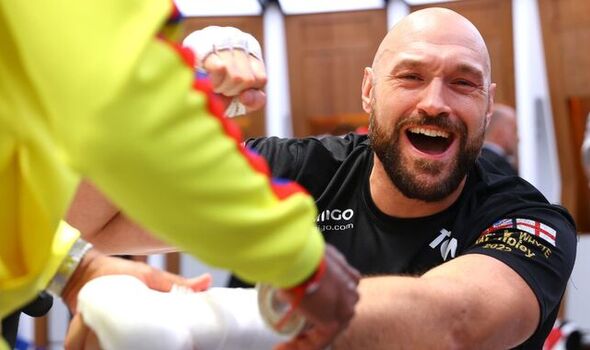 Tyson Fury would only be tempted to come out of retirement for two fights, Top Rank president Todd DuBoef has claimed. Fury has been retired since retaining his WBC heavyweight title in April with a stoppage victory over Dillian Whyte at Wembley Stadium.

However, The Gypsy King is being given time by the WBC to make his final decision on retirement before he is stripped of his heavyweight title, leaving the door open for a future undisputed fight against the winner of Oleksandr Usyk and Anthony Joshua. Fury has also retired on numerous occasions in the past, only to go back on his word and return to the ring.

And DuBoef believes a showdown against either Joshua or Usyk or a hybrid boxing bout in MMA gloves with UFC heavyweight champion Francis Ngannou are the only fights that could persuade Fury to come out of retirement.

“I think there is obviously a lot brewing about the rematch between AJ and Usyk,” DuBoef told Sky Sports. “Obviously that has always been on his and everybody’s target, but I think at this point there is nothing to be talked about because he hasn’t determined what he wants to do.

Cordina v Ogawa: 5 boxers to watch out for on the undercard

Calzaghe back in training with ‘long list of people’ querying return

“Maybe the winner, when that fight happens, can pull him out, or maybe something else can be motivational like Ngannou. We saw Francis Ngannou get in the ring and it was kind of bizarre that the guy was retiring but the MMA heavyweight champion was getting in the ring to talk smack – which one are we doing here?

“But is it going to be he just sits in the South of France on the beach there and enjoys it? That again, I am speaking for him and that is a difficult position for me to be in to speak on what his feelings are.”

The fight with Ngannou came very much out of the blue and has already been verbally agreed. Minutes after announcing his retirement after the Whyte fight in his BT Sport interview, Fury called Ngannou into the ring for his ESPN interview to talk up a future fight after the pair had traded barbs on social media.

“This is going to be one very special fight,” Fury told ESPN in the ring after his win. “It’ll be something never before seen in the history of our sport. We’re not talking two guys around 140lb, I’m 270lb, he’s 270lb. It’s going to be an explosive fight when it happens.

Usyk and Joshua are set to face each other on July 23 in Saudi Arabia for the WBA ‘super’, IBF and WBO heavyweight titles. Should WBC champion Fury choose to fight the winner then they would be competing in the first undisputed unification heavyweight bout during the four-belt era.