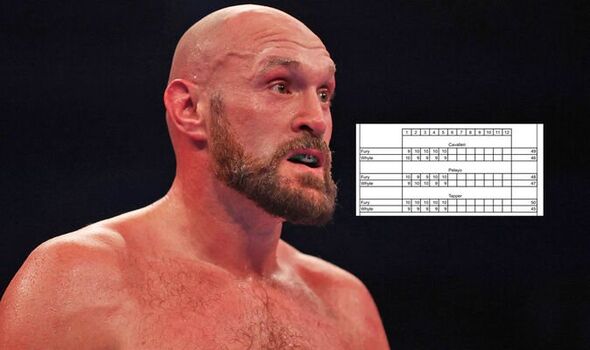 Mexican judge Juan Carlos Pelayo is facing heavy criticism for his scorecard at the time of Tyson Fury’s brutal sixth-round stoppage of Dillian Whyte at Wembley Stadium. Heading into the bout, the Gypsy King had personally requested that no British judges would be ringside for the contest due to a series of controversial and iffy results in recent months, including Josh Taylor’s super-lightweight triumph against Jack Catterall in late February.

His wish was fulfilled but despite the victory, the WBC and Ring Magazine heavyweight champion is still likely to feel aggrieved with Pelayo’s take on proceedings.

That’s because he gave Whyte two of the five rounds before the ref called the contest to a halt, awarding the Body Snatcher Rounds 2 and 3.

Although it now seems irrelevant, it meant Fury was just one up at the time of the stoppage, something boxing journalist Dan Rafael has labelled “grotesque.”

He wrote on Twitter: “Grotesque that Pelayo gave Whyte rounds 2-3. The only round he could possibly have won was the 1st.”

Rafael was not alone in thinking the scorecard was dubious, to say the least…

One fan responded on Twitter: “He had landed 14 punches through 3 rounds. Ridiculous to have had him winning the fight at that point.”

Another wrote: “Pelayo needs help, the other two cards are good.”

Italy’s Guido Cavalleri had Fury 4-1 up with Whyte awarded Round 1 – which surprisingly, he boxed southpaw.

Meanwhile, Canada’s Robert Tapper had Fury winning all five rounds, which was the general feeling from those in attendance covering the fight.

Fury was in control from the get-go and he too also changed stance from orthodox to southpaw in the second round, in a bid to confuse Whyte.

The Gypsy King briefly had Whyte hurt in the fifth before the challenger recovered and briefly cleared his head.

But what would await him in the sixth was a peach of an uppercut that saw him fall on his back.

Whyte would beat the count but stumbled into the ropes, prompting Mark Lyson to correctly wave it off.

Fury praised the man in the middle during his post-fight press conference, claiming he did not want to inflict further punishment on Whyte when he was clearly still badly hurt.

“I’ve thrown some good punches in my career but it was definitely a Wembley showstopper, wasn’t it? A big right uppercut. I was very happy with Mark Lyson, he did a fantastic job,” Fury said.

“If he had allowed it to continue and me to storm into him and hit him with two or three more then he may have been in some serious trouble.

“So big shout out to the ref. He made the right call there. I would have had to pile on to him again and hurt him, and I didn’t really want to do that.”