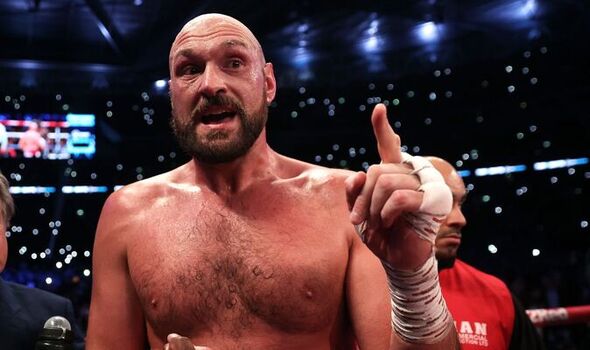 Tyson Fury and Frank Warren have held discussions over the Gypsy King’s return to the ring – although the Hall of Fame promoter hinted that an exhibition bout could be next for the WBC and Ring Magazine heavyweight world champion. The 33-year-old called time on his illustrious professional career in the aftermath of his sixth-round knockout victory of Dillian Whyte in front of 94,000 at Wembley Stadium, when he insisted it was time to walk away from the sport once and for all.

The public have not necessarily bought that narrative though with Fury still yet to relinquish his green WBC strap.

He will have until the end of the year to make his final decision, as the prospect of an undisputed heavyweight title clash with Anthony Joshua or Oleksandr Usyk draws ever close ahead of their rematch in Saudi Arabia on August 20.

But Fury has now confirmed we could see him back in the ring very soon, following a meeting with his promoter Warren in London.

He told Queensbury Promotions: “We’ve got some very exciting news coming, I think the world’s been waiting for a plan of action.

“We had a nice bit of Italian down in London, we had a nice conversation about lots of stuff, Frank do you want to take it from here?”

Warren added: “Yeah, we looked at a couple of scenarios, I spoke to Tyson again today and just now and hopefully we’re going to come up with something that Tyson wants to do.

“We were talking about various scenarios and maybe an exhibition bout, we don’t know.

“Something will come out of it, once Tyson is happy then I’ll be happy. There’s obviously a lot of things to talk about.

“It goes without saying that the public want to see Tyson Fury back in the ring, where he is the king.”

Fury recently shot down reports that his team were in talks over an undisputed fight that would be staged on December 17, just before the World Cup final in Qatar.

He tweeted: “This is all news to me! Biggest load of rubbish ever!”

The Gypsy King remains adamant that until he reveals otherwise, he is retired.

“There’s always going to be that clamour – even when Joshua and Usyk are finished and there’s new contenders and champions, they will always ask Tyson Fury to come back as undefeated champion and fight these people,” Fury recently told PA.

“But rumours are rumours. Until I say that I’m actually doing a fight, take me at my word.

“For now I’m done with professional boxing and I’ve moved on to other things, but you can never say never. You never know what the future holds.”