Look at him laugh every time someone like Hunter Ioane pulls out an all-time quote like “I don’t have a brain”, or when social media type Jordan Simi calls ex-NRL star Justin Hodges old and slow. No hint of nerves, no steely facade. The 2-0 super welterweight looks so comfortable atop the stage.

Even when the 24-year-old’s last name is written on every poster, a name that carries so much weight in Australian boxing. And not for the first time, the other name on those posters is “Horn”.

Tszyu will enter the ring as the overwhelming favourite when he faces Ben Horn (4-4) at the Hordern Pavilion on Wednesday night.

The bout is billed as the “Battle of the Brothers”. It was Tim Tszyu who effectively sent Jeff Horn into retirement two years ago. It was Australian boxing’s passing of the torch. Horn, a former world champion; Tszyu, a challenger who gets his shot at the crown on January 28.

Tim Tszyu has a chance to become just the ninth undisputed champion since the four-belt era began in 2004 when he challenges Jermell Charlo for his super welterweight titles in Las Vegas. 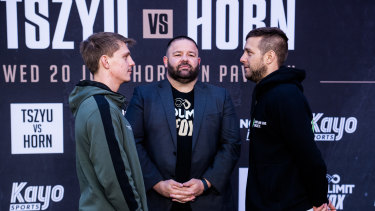 Nikita Tszyu, younger brother of Tim Tszyu, is preparing for a fight against Ben Horn – brother of Jeff Horn.Credit:James Brickwood

Their father already minted as a legend of the sport, so many naturally wonder if the youngest can mimic his brother’s rise.

“Tim’s level right now is motivation for what I can be, it’s what I am working towards,” Nikita Tszyu said.

“Having him in my corner at all times, having his advice, it’s just a wonderful source of information. We have a brotherly connection.

“He’s always been a bit of a maniac when I’m fighting, I can always hear his voice firing over everyone else’s. It’s such a wholesome moment when we look at each other [after a win], just smiles, laughter and happiness.”

But those moments may soon become harder to capture.

Tszyu’s manager Glen Jennings is already struggling to match one of Australian boxing’s brightest young prospects after his first two bouts were finished inside two rounds.

“You’ve seen it, I’m not spinning any yarns. There’s been two or three of them on national TV after they’ve had a win [saying] ‘I want to fight the very best, I want to fight Nikita Tszyu’. I’m sitting at home thinking ‘this is great’,” Jennings said.

“One by one, the phone calls get made and they’re not interested, they say no. I say ‘what do you mean no?’ How do you do that?

“We went through this with Tim as well. We will look overseas if we have to. It’s not a race with Nikita, I’m very conscious of the fact he is a rookie, and we’ve got to bring him along accordingly. We’ll build him up at a good rate, as we did with Tim.”

For now, they intend to take the bull by the Horns.

As for the advice former welterweight champion Jeff Horn had for his brother?

“Punch him in the head more than he punches you,” Ben Horn said.