Tim Tszyu will get his dream world title shot against Jermell Charlo, with the clash against the undisputed world champion scheduled for January 28.

The on-again, off-again bout is now definitely going ahead after the date was officially locked in for the start of next year. The venue is yet to be confirmed, but the fight will be going ahead on American soil.

Charlo let slip with the fight date when he posted and deleted it from his Instagram account, but sources with knowledge of the negotiations have confirmed the timing. A January stoush will give Tszyu, who recently underwent hand surgery, time to sufficiently recover from the injuries he sustained against American Terrell Gausha in his last fight.

The saga to get the Charlo fight locked in has been an example of boxing politics at work. The Tszyu and Charlo camps agreed to the financials required to make the fight happen last month, only for it to emerge that the American had also struck a deal to face Bakhram Murtazaliev, the IBF’s mandatory challenger. If Murtazaliev accepted step-aside money to make the Tszyu-Charlo fight happen, then the undefeated Australian will get the chance to contest for all four of Charlo’s belts and become just the ninth undisputed world champion across all weight divisions since the four-belt era began in 2004.

Charlo etched his name into history when he notched a 10th-round stoppage of Argentine Brian Castano in California last month. In winning the rematch – their first contest resulted in a controversial draw – Charlo added Castano’s WBO belt to the WBC, WBA and IBF belts already in his possession.

Tszyu plans to base himself in the United States for two months in the lead up to the fight to acclimatise and get world-class sparring in as part of his preparations. Tszyu is expected to call a press conference on Thursday to discuss the latest developments. 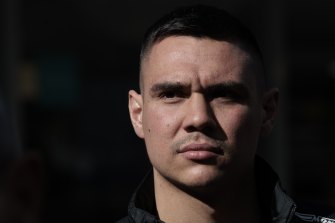 Tim Tszyu will get his dream clash with Jermell Charlo.Credit:SMH

The “Soul Taker” has wanted to take on Charlo from the moment the cocky American taunted him as “Tim Kostya Tszyu”, a jibe about him not being as good as his legendary father, Kostya. Tszyu has taken exception at the sledge, prompting him to respond with “Call me by my name mother—–” after he defeated Gausha in Minneapolis earlier this year.

“He’s just the typical, flashy, talk smack-type guy,” Tszyu said last month. “There’s no better way to shut him up than to punch him in the face. That’s what I want to do.

“This is the destiny, all I’ve ever worked for. I’m 27 years old and for it to happen this early in my career, it’s great.”

Tszyu’s younger brother, Nikita, will fight against Jeff Horn’s sibling, Ben, in the “Battle of the Brothers” at the Hordern Pavilion next Wednesday.