Boxing promoter Dean Lonergan says he will ask Queensland police to increase their presence at his impending Brisbane fight night, with Australian heavyweight champion Justis Huni set to step into the ring less than a week after his home was sprayed with bullets.

Huni and his family were breathing sighs of relief on Friday after a quiet night at their Sunnybank Hills home, which was the target of a drive-by shooting in the early hours of Thursday morning. Police had patrolled their street throughout the night as investigations into the attack continued.

It was unclear whether the Huni household, where 10 family members were residing, was targeted in the shooting or if it was a random attack. Huni’s father, Rocki, said on Thursday it was possible there were certain people within boxing who didn’t want his son – an amateur star who missed the Olympics through injury – to succeed as a professional.

Huni is due to fight Joe Goodall at Nissan Arena on Wednesday and the fight will go ahead as planned. But Lonergan said he would try to ensure there was extra security on hand given the alarming events of the past few days.

“We’ll be talking to the police just to make sure we have a bit of an extra presence there,” Lonergan said. “Police come to a lot of events as it is. I’m not expecting any more drama on fight night, it is what it is, and we move on.

“I have absolutely no idea what has gone on or why this incident has happened. I have been doing events for 25 years and it’s the first time I have come across this. We’re hoping it is a random occurrence and there will be no repeat going forward. 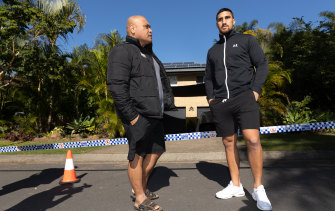 Rocki (left) and Justis Huni outside of their Sunnybank Hills home, which was sprayed with bullets.Credit:SMH

“From what I can see, Justis is pretty much as unaffected as you can be. It would have been a scary situation, 4am in the morning and wondering if they would be coming back. I spoke to both him and Rocki yesterday and they don’t want it to have any effect on the fight.

“It was a stupid thing for anyone to do, I don’t know what they were trying to say. I have a million questions. It was beyond stupid, I’m sure the police will be handling it.”

Former heavyweight champion Lucas Browne said on Thursday he had been threatened by motorcycle gangs and other factions around the sport,. Lonergan said it was impossible to insulate his fighter from all the unsavoury elements that may come with the sport.

“You can’t wrap people up in cotton wool. It’s a case of Justis shutting off to that sort of carry-on because 99.99 per cent of all those threats are hollow. Now we have a serious incident on our hands and we leave it for the police to solve.” 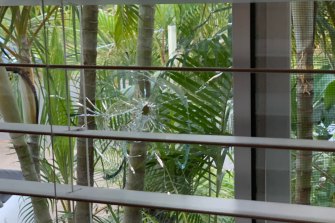 Bullet holes through the front window of Justis Huni’s house.

Huni said he had no concerns for his safety or that of his family and intended to pour all of his energies into his return to the ring. The 23-year-old hasn’t fought since June last year when he underwent hand surgery after his win over Paul Gallen.

“At the moment I’ll leave it with police and keep doing what I was doing before. I’m not worried about it, the fight is my only focus at the moment. I’m sure it will handle itself,” Huni said.

Rocki Huni said on Friday he was still coming to terms with the attack and while he was ensuring his son kept his focus on the fight, the events had put everything in perspective.

Had the attack happened just half an hour later, Huni’s wife Paula may have been sitting in a chair in the living room feeding their six-month-old granddaughter.