Home » PFL 1: Brendan Loughnane blasts his way to the top of the table with first-round knockout

Manchester’s Loughnane was in action on the first night of the PFL’s 2021 season in Atlantic City, New Jersey, and the Brit produced the biggest performance of the night to finish Moraes and deliver a statement to his rivals in the 145-pound season.

Loughnane looked in outstanding form as he showcased his sharp striking against former UFC fighter Moraes.

He hurt the Brazilian badly with strikes and backed his man up against the fence, looking for a finish.

And the Brit found his mark when, after a salvo of strikes, he connected clean with a big right hand that sent his man to the mat for a huge first-round knockout.

“Clean. You can say that again! That was decisive,” he said immediately after his victory.

“Straight in. No more judges’ decisions. Nobody ripping me off this year, mate. Six points baby! What? Who’s next?

“Who’s all these bookmakers putting me as the underdog, as well? What’s going on there?

“Do they not know who I am? Come on, mate! I’ve been in this game my whole life. Thirteen years of hard work. My only losses were robberies on decisions.

“Now Brendan’s found his game, and every single one of these featherweights can get it.

“Sheymon Moraes has beaten top-echelon UFC fighters. We’re talking about a world Muay Thai champion. I went in there and just took him out, easy.” 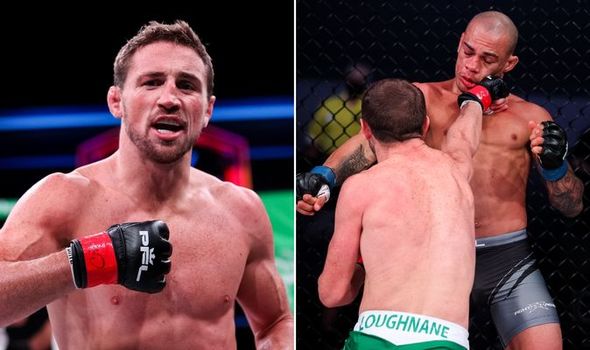 Loughnane’s first-round finish means the Brit is now the man to beat in the 2021 PFL season, after he claimed the maximum possible points haul from his first fight of the campaign.

In the PFL, fighters earn three points for a win and one for a draw, but can earn additional bonus points for claiming their victories inside the distance.

Three bonus points are on offer for a first-round finish, with two for a second-round stoppage. A third-round victory earns one bonus point.

With his first-round knockout earning him six points from his first fight, it means Loughnane is head and shoulders above the pack ahead of his crucial second bout of the regular season.

The PFL season sees fighters fight twice, with the top four in the points standings after those two bouts moving on to compete in the PFL Playoffs, with the overall champion claiming the title, and the $1 million prize.

As things stand, Loughnane is three points clear at the top of the table, and knows that victory of any kind in his next matchup will guarantee him a place in the playoffs, where he’ll find himself just two wins away from $1 million dollars.

And the Brit was buzzing during the post-fight press conference where he made clear his intention to go all the way to the final and earn the $1 million prize.

“I am the only one to finish anybody tonight! What does that tell you?” he said.

“I came out here tonight and fought a world-class UFC veteran who’s fought Marlon Moraes, who’s fought Zabit (Magomedsharipov), who’s fought Sodiq Yusuff, and I went out there and just dismantled him and put him away in the first round.

“I told you, I’m not a joke. I’m here to stay. I’m here to win this whole tournament. I’m not messing around, that’s the truth!” 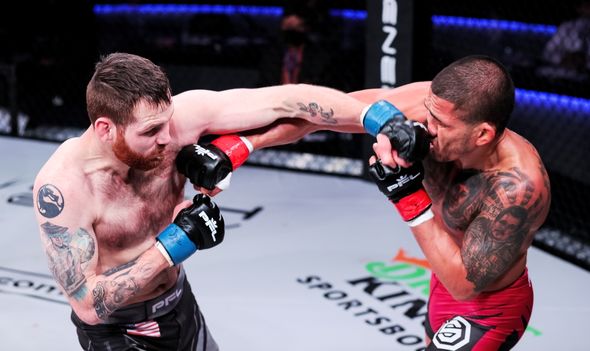 The rest of the night was filled with shock results as the two reigning PFL champions crashed to first-night defeats, while one of the league’s biggest new signings also suffered a surprise loss.

Pettis, who was tipped to be a top contender for the 155-pound title this year, was dropped twice by Collard, who made a name for himself as a man who halted the rise of hyped prospects as a boxer.

Collard took that same giant-killing quality into his first PFL matchup as he dropped Pettis twice and survived a late onslaught from the former UFC star to pick up a decision victory and claim a huge scalp on night one of the season.

That wasn’t the only shock of the night at lightweight, as two-time 155-pound champion Natan Schulte also fell to a decision defeat to Polish submission specialist Marcin Held.