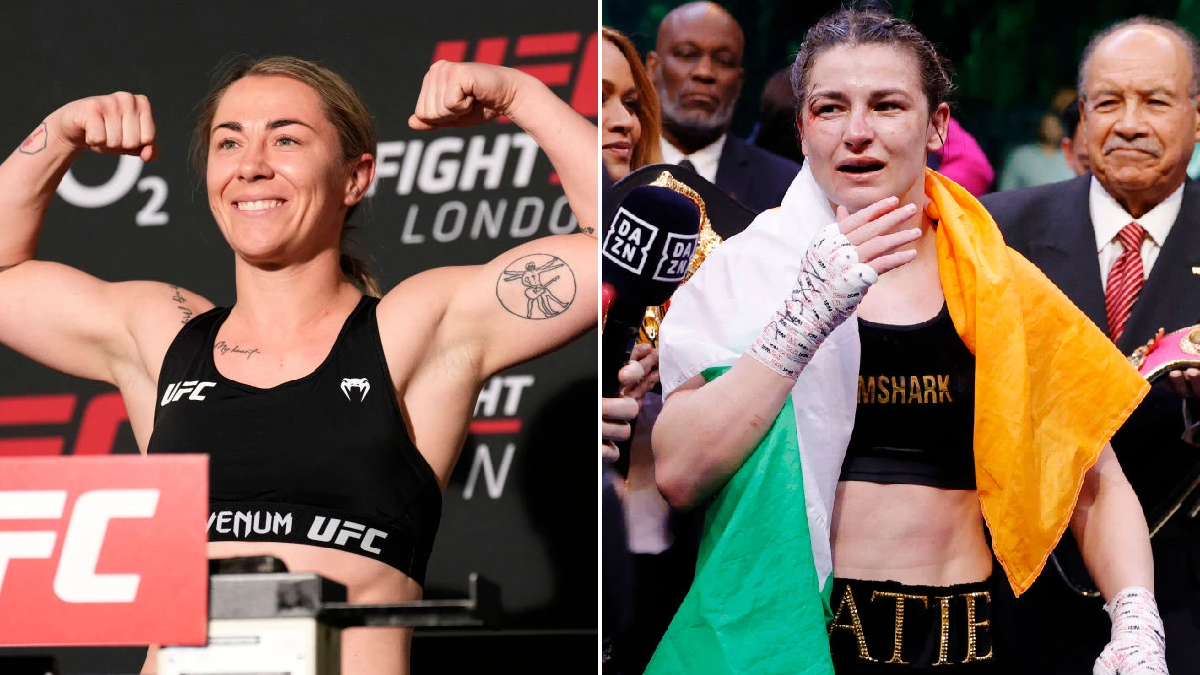 Molly McCann hopes to fulfil a career dream by making the switch to boxing and sharing a card with Katie Taylor – but only after she has chased down glory in the UFC octagon.

The 31-year-old is back in action against Hannah Goldy as UFC returns to London on Saturday at the O2 Arena – the scene of her devastating knockout victory over Luana Carolina in March.

That reverse spinning elbow stunned the home crowd and turned McCann’s ‘world upside down,’ according to the Liverpudlian, who sealed her second win on the bounce having previously suffered back-to-back defeats that briefly left her future with the promotion uncertain.

McCann still has world title ambitions and after seven fights with the promotion where she was ‘learning on the job’ in many of those, she remains focused on forcing her way into that picture.

Witnessing Talia Santos, who edged past the Briton in July 2020, take Valentina Shevchenko to a split decision in a flyweight title clash last month has served as further inspiration as she seeks to take another step up the ladder.

‘The win over Carolina, it gave me the notoriety I think I deserved, that people had not really seen,’ McCann told Metro.co.uk.

‘I have found my rhythm and my style now at the top level. There were so many people who doubted me in that. I knew just bide your time and I would get the finish and it has taken me around the world and back. It’s taught me to dance with the devil. There’s been a lot of growth from it.

‘Anyone who fights in the UFC is aiming for that belt. No one is there believing they can’t touch it. Someone I fought who beat me two rounds to one during lockdown [Santos] has just fought for the title.

‘That gave me so much confidence to know I am the elite, I am that level. I feel that now, I have done enough learning on the job. Without getting ahead of myself and staying focused, the rewards will come.’

Crossover between the worlds of boxing and MMA remain a compelling option for many fighters with three-weight world champion Claressa Shields now aiming to replicate her stunning achievements in the ring with the PFL with Holly Holm winning titles in both disciplines.

‘Meatball’ shares the same ambition having boxed as an amateur and works alongside Joe McNally, the trainer who counts former world champion Liam Smith among his fighters.

McCann is regularly spotted ringside at UK shows and says she has already been in Eddie Hearn’s ear about her own move over. While there is no immediate rush, the ultimate dream is to share a show with Irish icon Taylor, who further enhanced her legendary status with a sensational victory over Amanda Serrano in New York in May.

There remains hope a rematch will take place back in Ireland in 2023, where the unified lightweight champion has not fought since turning professional six years ago and McCann is determined to be part of the show.

‘Of course,’ McCann said when asked if she hopes to one day switch to boxing. ‘I have spoken to Eddie myself about it. My boxing coach is Liam Smith’s coach, he’s Thomas Whittaker Hart’s coach, JJ Metcalf’s coach… I am in brilliant hands for that. But first things first, I am not losing sight of what the goal is.

‘The dream, one I’ve put put it in my goals when I write it down, is Katie Taylor’s last fight at Croke Park and I would like to be on the undercard. I think we are years off because I just can’t see her giving in. But I would very much like to do that.’