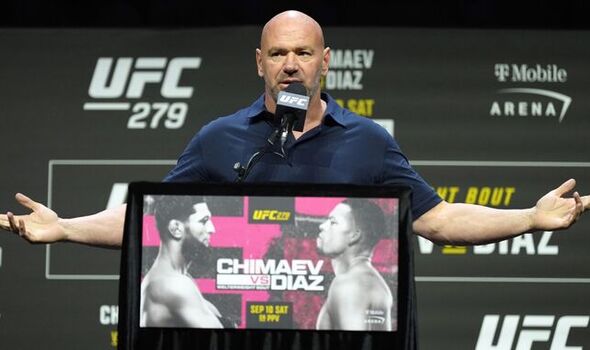 The UFC 279 press conference was cancelled on Thursday night after a mass brawl broke out backstage. Six fighters were involved in the altercation with Khamzat Chimaev and Kevin Holland being identified as the main culprits by UFC president Dana White.

After a long delay to the start of the press conference, White took to the mic and told fans that he was going to bring the fighters up in pairs in order to avoid any further problems. But after Holland and Daniel Rodriguez spoke to the assembled media, White cut the press conference following a brief conversation with one of his members of staff.

“Yeah, this ain’t gonna happen, I apologise everybody. I am in very weird waters here; this has never happened in the history of this company. Trust me when I tell you this is the right decision not to do this press conference right now,” said White as boos echoed around the MGM Grand Garden Arena.

“I’m with you but for everybody’s safety, this is the right decision. I apologise, thanks for coming.”

In a media scrum shortly after the news, White clarified the situation further. “I don’t even know what to call it, never in 20 years, however long I’ve been doing this we’ve never had an incident like today. All hell broke loose out here, we stopped it but we didn’t do a good enough job of not letting it happen.”

He continued: “There were multiple fighters involved in this thing, the camps hadn’t even got into it yet. But I could see where this was going. You don’t have to be a rocket scientist to figure out where this whole press conference was headed. There were so many people in all the camps that once this started it would have been bad. Now, I have to look at an event going off on Saturday if this continues.”

White went on to affirm that this will not stop Friday’s ceremonial weigh-ins from taking place nor the event itself and that they will ‘tighten up on security’.

According to reports from ESPN, Chimaev and Holland – who have locked horns on social media in the past – had to be separated after they came face to face backstage before Chimaev hit Holland with a front kick.

Chimaev was pulled away by Li Jingliang, who fights Tony Ferguson on Saturday, and former fighter and MMA agent Tiki Ghosn, as well as security.

When members of Nate Diaz’s team – who faces Chimaev in the main event – saw Ghosn with the Swede, they thought Ghosn was part of Chimaev’s team and reportedly started yelling at him while throwing water bottles. According to White, Ghosn was hit by multiple water bottles and took some slaps and kicks as well.