George Kambosos jnr’s upcoming title defence against Devin Haney is part of a two-fight deal at Melbourne’s Marvel Stadium, with big-name Vasiliy Lomachenko set to be his next opponent later this year.

Kambosos is likely to have long-time sparring partner and boxing legend Manny Pacquiao in his corner when he takes on Haney on June 5. The winner will become just the eighth undisputed world champion across all weight divisions since the four-belt era began in 2004.

If Kambosos is successful, his next defence will also be at Marvel and will be offered to Lomachenko in October or November. Lomachenko was Kambosos’ preferred opponent for his first defence of the WBO, WBA and IBF belts, but the Ukrainian star instead opted to take arms following the Russian invasion.

Team Kambosos respects Lomachenko’s reasons for opting out of the initial bout and the camps are hopeful the anticipated showdown will occur if the Australian keeps his undefeated record intact against Haney.

“Lomachenko will be the next fight here in Australia, that’s the deal. We won’t bypass him because he is the guy we wanted. 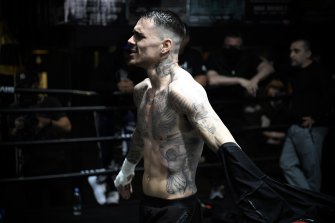 Geoge Kambosos Jnr is ripped and ready to defend his titles.Credit:SMH

“Unfortunately, he couldn’t make it happen and leave his people behind. He hasn’t signed on the dotted line, but we’re giving him credit for what he has had to go through.”

The Kambosos camp has assured Sydney fight fans that they will get to see the lightweight world champion in action once they have fulfilled their contractual obligations with the Victorian Government.

“We’re Sydney guys, we want to do it in Sydney as well,” Jim Kambosos said.

“The secret is to keep winning, which we’re confident we’ll do against Devin Haney.

“We’ve got a new stadium that will be finished by then at Moore Park, the Sydney Football Stadium. It hasn’t got a roof on it, but I’m sure we could do it at a time when the weather is a bit drier. We want to keep fighting here for a long time.”

Kambosos has sparred more than 250 rounds with Pacquiao, who recently lost a bid to become the President of the Philippines.

“That’s what I’m hearing, that he’s going to be here,” George Kambosos said.

“I look forward to catching up with him. We keep in contact and unfortunately, he didn’t succeed in his push to become president, but he’s a strong man. I’m sure he will be pushing for the next election.”

Asked what he had learnt from the multiple world champion and hall-of-famer, Kambosos said: “My time with Manny Pacquiao was invaluable for my career, especially early in the piece.

“I was doing my 12-round preparations like he was, so when I got to my championship fights, I knew exactly what I had to do to become world champion.

“He said I was ready to become world champion back then. Hearing that from an all-time great, from a guy like Manny Pacquiao, when he’s telling you in 2017-18 you should be a champion right now …that gave me an extra boost.”