Home » Fighting » ‘I’ll be the heavyweight champion of the world’, says Tszyu

Tim Tszyu has made the extraordinary prediction he will eventually become the heavyweight champion of the world.

Tszyu’s next fight is against Jermell Charlo for the American’s IBF, WBC, WBA and WBO super-welterweight straps in an attempt to become just the ninth undisputed champion in the four-belt era. The Australian’s immediate focus is the clash with Charlo in Las Vegas on January 29 [AEDT], where he believes a knockout victory is “guaranteed”.

However, Tszyu believes it is just the beginning of a historic conquering of boxing’s biggest names across multiple weight classes that will culminate in him becoming the heavyweight champion. 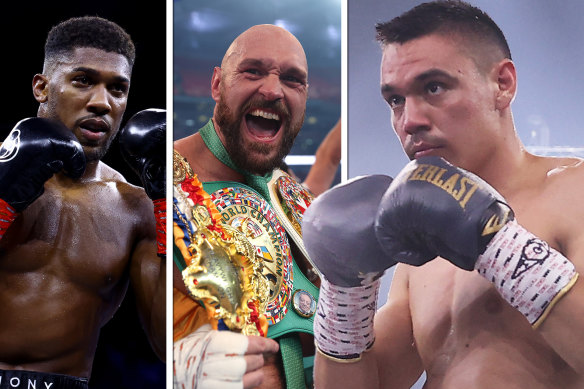 Tszyu currently fights at the super-welterweight limit of 69.85kg; the heavyweight division (90.89kg) is three weight classes and more than 20kg above him. To put it into further context, heavyweight champions Tyson Fury and Oleksandr Usyk weighed in at 120kg and 100kg respectively for their last fights. Mike Tyson, in his pomp, weighed about 100kg.

No one in history has made such a steep ascent while picking up world titles on the way, but the 27-year-old is adamant he will be the first.

“My first goal is, of course, the undisputed [title], that’s all I’m looking for. But after that, my mind is going to take me elsewhere. Even to the heavyweights,” he said.

“I’ll smack [Anthony] Joshua with a few body shots, let’s see how he reacts to that.”

Tszyu recently completed a training camp in Thailand, where he worked with John Hutchinson, coach of several rising UFC stars. The “Soul Taker” has fully recovered from hand surgeries and has three months to get into peak condition for his fight with Charlo.

“We worked on a lot of power and being physically strong,” Tszyu said of his time in Thailand. 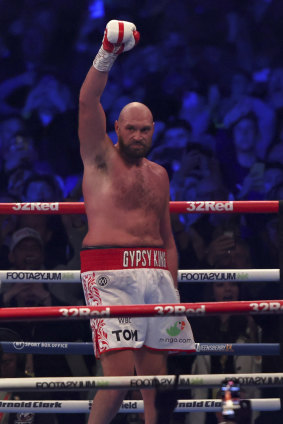 “I don’t want this fight going the distance. I plan on knocking him out before the 12th round.

“This is no bullshit man, you get this opportunity once in a lifetime. You can win world titles in divisions, but to be undisputed in the four-belt era, it doesn’t happen often, it’s only happened seven times in boxing history.

“This is the Super Bowl of the NFL, the NBA play-offs, the last winning shot, a buzzer beater. This is the World Cup grand final. This is not just the biggest moment in boxing but in sports.

“It’s massive, it doesn’t get better.”

Fellow Australian George Kambosos jnr failed in his quest to become an undisputed champion, losing his rematch against Devin Haney in Melbourne. Should Tszyu achieve the feat, he will outdo his father, Kostya.

“Back then there wasn’t a four-belt era, he did it in the three-belt era,” Tszyu said.

“One thing is winning it, the other is doing something else in history. We are here to create history, to create special sporting moments, not just boxing moments.”

Watch SBW v Hunt live & exclusive on Stan Event event on Saturday 12 November. New customers can sign up to a Stan free trial and can purchase the Pay-Per-View at stan.com.au/event.