Home » Fighting » ‘Don’t doubt us’: Fury vows to go out with a bang in Wembley homecoming

Tyson Fury has vowed to put on a “f—ing real fight” against Dillian Whyte in his long-awaited homecoming after weighing in significantly lighter than his most recent bout for what he says will be his last professional contest.

Friday’s weigh-in marked the end of the official build-up to one of the biggest events in British boxing history, with lineal champion Fury putting his WBC and The Ring heavyweight titles – and his undefeated record – on the line in front of an expected crowd of 94,000 at Wembley Stadium.

It was a small taste of the electric atmosphere that lies in wait on Sunday morning (AEST), with a raucous crowd of about 1000 cramming into Boxpark – an indoor events space a short walk from England’s national stadium – to catch a glimpse of Fury and Whyte as they crossed paths one last time.

There were heavy jeers for Whyte, the Jamaican-born Londoner and Fury’s one-time sparring partner, as he tipped the scales at 253.3 pounds (114.9 kilograms).

But the cheers and applause for Fury nearly lifted the roof when the “Gypsy King” stripped off, paraded the imperfect physique his father John says is inspirational for “average Joes” throughout the world, and then danced around on stage to Gala’s nascent sporting anthem Freed From Desire.

Fury clocked 264.8 pounds (120kg), 5.5kg) lighter than the last time he entered the ring for the third fight in his famous trilogy against Deontay Wilder last year in Las Vegas. 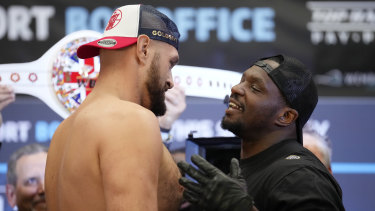 This is his first bout in the UK since 2018 and, he insists, will be his last before retirement, although most informed boxing observers do not believe him and expect to see him face at least one of Oleksandr Usyk, the WBA (Super), IBF, WBO and IBO heavyweight title-holder, or fellow Brit Anthony Joshua before eventually hanging up his gloves.

“You know what, you guys are f—ing unbelievable,” an animated Fury told the crowd. “I’m so happy to be back here fighting at Wembley Stadium and you people made it happen.

“I just want to say a big shoutout and respect to Dillian Whyte and his team, proper professional men – and we’re going to give youse a f—ing real fight.

“Don’t doubt us, we’re going to put a show on like no other before. It’s going to be a war, don’t worry about that.”

The mutual respect that Fury and Whyte showed for one another at their pre-fight press conference continued at the weigh-in with the pair even trading hats before shaking hands, parting ways and finalising their preparations. 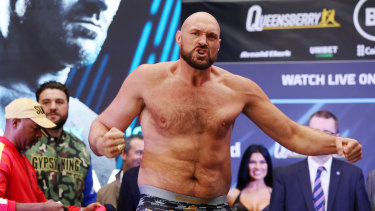 Tyson Fury revs up the crowd at the weigh-in.Credit:Getty

Fury is the raging hot favourite, having never been stopped before in his 32 professional fights, but Whyte looms as a tricky customer and has waited a long time for this opportunity.

“There’s not much in it,” Whyte told Sky Sports when asked about the weight difference between him and Fury, who also boasts a significantly longer reach.

“It’s what we are; different strokes for different folks. We focus more on performance than weight … but 253 is a good weight for me.

Whyte said he wasn’t reading too much into the strange deference showed to him this week by Fury, who had spent most of the past month publicly trashing him for refusing to promote the fight due to a disagreement with the WBC over the purse split.

“It is respect but, with Tyson, I take him as it comes,” he said. “I don’t think we’re friends, or everyone is cool … tomorrow he might come out and be in a different mindset.”

Reigning WBC heavyweight champion Tyson Fury will defend his title against countryman Dillian Whyte live and exclusive on Stan Event on Sunday, April 24, from 3am (AEST), with the title fight after 7am. Stan subscribers can purchase the pay-per-view event for $60. New customers can sign up to a free trial and purchase the fight.