Conor Benn vs Chris Algieri LIVE: Undisputed lightweight champion Katie Taylor will shortly take to the ring to face Firuza Sharipova… before ‘The Destroyer’ looks to take a step towards a world title shot

Conor Benn looks to finish 2021 in style as he squares off against former champion Chris Algieri in an enticing welterweight clash in Liverpool.

The 25-year-old has already seen off Samuel Vargas and Adrian Granados in a highly impressive year, but ‘The Destroyer’ now has the toughest test of his career to negotiate as he pushes towards a world title shot in 2022.

Also in action is undisputed lightweight champion Katie Taylor, who, similarly to Benn, is looking to progress to 20-0 as the 35-year-old takes on Firuza Sharipova.

With another eagerly-anticipated bout between the pair swiftly approaching, Sportsmail takes you through everything you need to know.

Katie Taylor defends her complete set of lightweight belts against Firuza Sharipova, who has assured she’s coming into fight.

Taylor is looking to set up a mouthwatering bout against Amanda Serrano next.

And just like that, there’s another result to report. Robbie Davies Jr claims a huge stoppage win against Henry Lundy, with the pair fighting for the WBA Continental super-featherweight title.

Davies Jr had Lundy in all sorts of trouble in the first round, and in the second he quite literally punched him out the ring, before the referee quickly waved off the contest.

A huge win for Davies Jr!

Before we look ahead to the co-main events, let’s first take a quick glance at the results from the undercard so far.

Up first on the main card, Caoimhin Agyarko claimed a TKO victory over Noe Larios Jr in round nine.

Then Peter McGrail got rid of super-bantamweight Engel Gomez in just two rounds.

And most recently, Joe Cordina defeated Miko Khatchatryan by unanimous decision in their super-featherweight clash 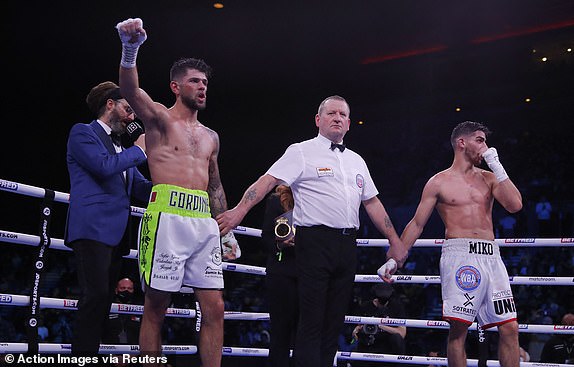 A huge night in the young career of Conor Benn is upon us, as he looks to take a giant leap towards a world title shot against the experienced Chris Algieri.

Don’t go anywhere as we build towards the enticing event, with undisputed lightweight champion Katie Taylor also on the card. We’ll provide round-by-round updates of both of he co-main events.

Oh, and Conor’s already in the building! 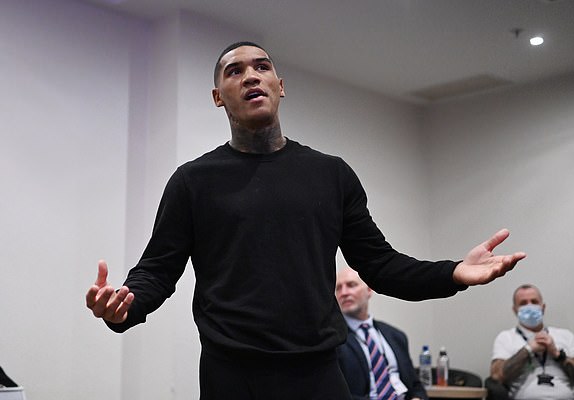