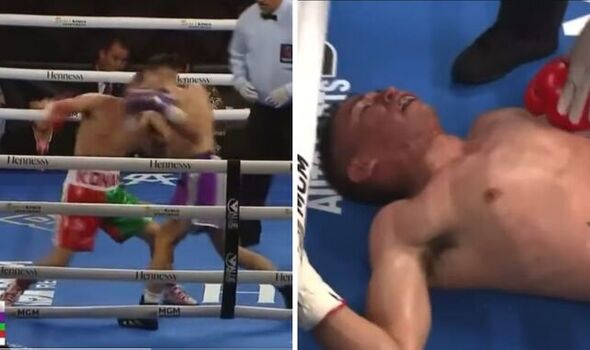 Marc Castro (8-0) kicked off the Canelo Alvarez vs Gennady Golovkin III undercard in style with a brutal knockout victory over Kevin Montiel Mendoza (6-2-2) in the fifth round of their super-featherweight contest.

There is a lot of expectation surrounding the youth and junior world amateur champion and it’s easy to see why. The young American puncher was in complete control all night as he dictated range with his feet while battering his foe with a piston right hand.

Montiel was left on wobbly legs at the end of the fourth as he was caught with a fast combination against the ropes. Then, as the fifth round commenced, Castro, keen to not let his man off the hook, began to walk down the Mexican road warrior.

Planting his feet, Castro let rip in the pocket and countered a lazy left jab with a perfectly-time right uppercut that laid his man flat out on the canvas.

Rather than wildly celebrating his highlight reel knockout, Castro opted to take a knee in a sign of respect to his fallen opponent. A classy gesture from a 23-year-old with bags of potential.

Speaking about the finish in his post-fight interview, he said: “I see a lot of shots open, my corner and my dad were telling me uppercut, I thought ‘they’re seeing something, so I might as well throw the uppercut’.

“I felt him getting tired as the rounds went on but I didn’t want to push on the gas, I’ve got not got eight rounds, I’ve got ten to work.”

When asked whether he thought the knockout would go viral, he replied: “I hope so.”