Canelo Alvarez showed off his gruelling weight cut for this weekend’s trilogy bout with Gennady Golovkin as the Mexican released buckets of sweat from his sauna suit in a recent video. Canelo faces Golovkin for a third time on September 17 at the T-Mobile Arena, Las Vegas.

In his last bout, he was comfortably outpointed by WBA (super) champion Dmitry Bivol in a light-heavyweight contest. Now – as he cuts back down to his natural home at super-middleweight – the former pound-for-pound king is leaving no stone unturned in preparations.

In a video posted to Instagram on Monday, Canelo can be seen releasing a waterfall of sweat from his sauna suit, alongside the caption: “Happy fight week.”

Canelo and Golovkin previously fought each other at middleweight in 2017 and 2018. Their first contest ended in a split draw although the general consensus is that GGG should have had his hand raised on the night. When they boxed again 364 days later, it was another close-fought contest, but this time Canelo was given the nod via majority decision.

Fury vs Joshua has final issue holding up blockbuster showdown

Once again, the result was heavily contested by fans and media alike – leaving the door open to a decider a weight class above. In their previous two contests, both men showed a lot of respect before and after the fights but coming into the third there is no love lost.

During the launch press conference, Canelo tore into his long-time rival as he claimed that Golovkin is “two different people” and that despite pretending to be a “nice guy” he is actually an “a***hole.” At the time, Golovkin smiled and shrugged it off but added further fuel to the fire when he claimed that Canelo’s change in behaviour was due to the side effects of ‘certain substances’.

“I don’t even know how to explain it,” he told Boxing Scene. “Maybe it’s just the side effects of certain substances in the body. But I treat it as a sporting event, nothing personal. But the words that he chooses to say are unexplainable. Inexplicable.” 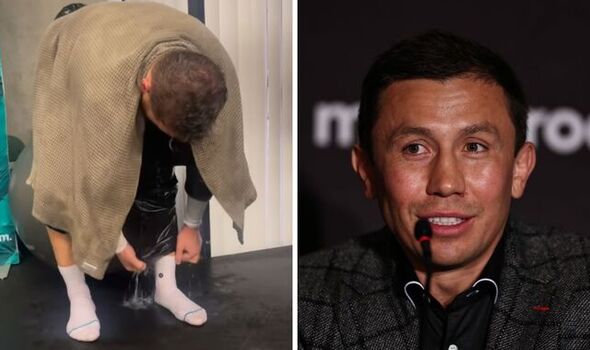 It appears the dislike has branched from Golovkin branding Canelo a ‘cheat’ after the Mexican tested positive for clenbuterol ahead of their original May 2018 date. At the time, Canelo and his then-promoter Oscar De La Hoya claimed that the performance enhancer had entered Canelo’s system after consuming meat contaminated by the substance, but Golovkin made it clear that he did not buy the excuse.

Regardless, Canelo is keen to rewrite the doubts surrounding their first two fights and stamp his authority on the trilogy with a big win on Saturday as he defends his WBA (Super), WBC, IBF, WBO, and Ring Magazine 168lb titles.