Home » Fighting » Anthony Joshua vs Tyson Fury is no longer under discussion as both champions focus on dangerous challengers, says promoter Eddie Hearn

Promoter Eddie Hearn has not held any fresh talks about rescheduling Anthony Joshua vs Tyson Fury as both champions are in a ‘very dangerous’ position.

The undisputed world heavyweight title fight fell apart last month as WBC champion Tyson Fury was ordered by an arbitration judge to face Deontay Wilder, scheduled in Las Vegas on July 24, while Joshua is set to defend his world titles against Oleksandr Usyk.

Fury’s US promoter Bob Arum had suggested the Joshua fight could be rescheduled in December, but the unified champion’s promoter Hearn admits negotiations cannot resume until both British rivals emerge victorious.

“Do you know what, I think right now, let’s just forget about that fight,” Hearn told Sky Sports.

“The only good thing to come out of this is that we have two good heavyweight fights. These aren’t marking time fights for Fury and AJ. These are two competitive, dangerous fights. 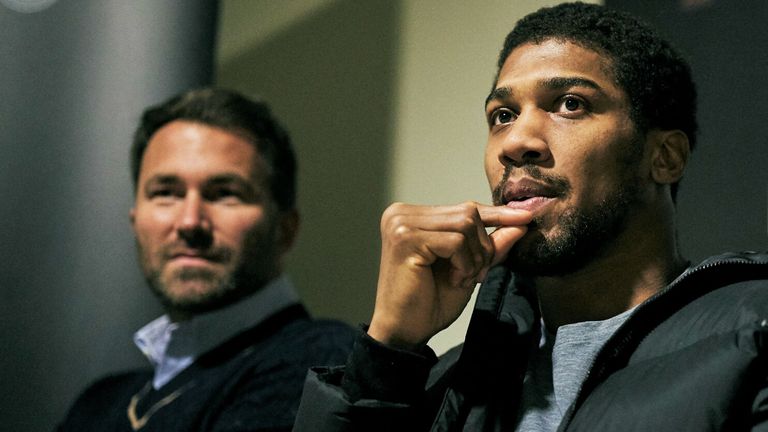 “Once those two nights are complete, let’s go back to where we kicked off before, because right now, there’s no conversations from the other side to us saying, ‘Let’s just get it in the diary for December or January.’ I don’t really want to get into that conversation. I want AJ to focus on Oleksandr Usyk.

Wilder’s team could potentially target an undisputed world title clash later this year, if the American defeats Fury, although co-manager Shelly Finkel is refusing to look past the trilogy fight.

“That would be the obvious next goal [undisputed fight with Joshua], but we can’t even think there,” Finkel told Sky Sports last month.

“Nothing will be bigger than this, even if he were to then go on and defeat Joshua. This is the biggest thing for him.”

Hearn is close to agreeing the Usyk fight, which is expected to be staged at Tottenham Hotspur Stadium in September.

He told Sky Sports: “We have both alerted the WBO, myself and [Usyk’s promoter] Alex Krassyuk.

“Terms are agreed. The offer we made to them has been accepted.

“We move forward to paper that now. We are going through the contract with their team.”

Wilder’s former opponent Malik Scott has been given a leading role in the Alabama man’s training team as they attempt to avenge Fury’s seventh-round stoppage win last February.

Usyk has also posted a video on social media of him preparing to challenge Joshua, a fellow London 2012 Olympic gold medallist.

“Usyk, who is not a tremendous puncher, is probably one of the most technically gifted fighters pound-for-pound. But I think AJ likes that. I think he wants to face that style, but he also needs to be ruthless in that fight.

“Both of those fights very dangerous in their own right and we hope and pray that both the Brits come through.”