Sonny Bill Williams would “love” to fight alongside Quade Cooper when the Wallabies playmaker is ready to make the transition from rugby superstar to prizefighter.

Williams is at the base of the mountain, as he puts it, ahead of his fight with Barry Hall, and couldn’t help but have a cheeky shot at the former Swans star’s cameo on reality television show SAS during a press conference on Monday.

But after conquering Hall, Williams told the Herald he will be pestering Cooper to have another crack in the boxing ring.

The pair were slated to fight on the same card seven years ago, before Cooper was forced to withdraw. While the star five-eighth is still an integral part of the Wallabies’ plans for the 2023 World Cup after making a remarkable comeback last year, Williams believes Cooper still has unfinished business in the ring.

“We’re always in contact. I’d love to have him here, and he loves boxing,” Williams said. “I’d say once his next contract is up, he’ll fight again.

“I reckon if the pandemic folded the [Japanese rugby] competition – there was some talk about that – I dare say he would be right here, right now, looking at a fighting career for himself.” 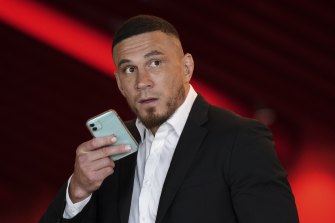 Between now and then, Williams has an intriguing bout with Hall to worry about. Both camps spent Monday’s press conference predicting the fight, which will be broadcast from Sydney’s Aware Super Theatre on Stan Event on Wednesday, will end in knockout.

But Williams explained why he will be the one left standing.

“I had a little crack about the SAS, and he’s come out and called me arrogant, and I’m not going to talk about that up there, because it’s just silly. It’s nonsense,” Williams said.

“I know he’s trying to sell the fight and all that, but I know who I am. I know what I see what I look in the mirror. And I’m definitely not arrogant.

“The arrogant part comes, for me, is when he says he is going to fight me, then Paul Gallen, then walk off into the sunset. He has to beat me first. It’s not a foregone conclusion. For me, that’s arrogance.

“I’d be lackadaisical. Doing school drop-off, training at my gym just up the road. For me, my sporting career has taught me that nothing is at face value. It’s just mind games.”

“I haven’t heard anything about his training camp. He knows everything about mine,” he said. “He’s watched all my sparring. That’s why I say that. But it is what it is. At the end of the day, that’s not going to stop me getting in the ring. We still have to fight, and I’m going to knock him out.”

Sonny Bill Williams v Barry Hall headline the eight-fight Turf War event on Wednesday from 6pm AEDT, streaming live and exclusive on Stan Event. New customers can sign up to a Stan free trial and can purchase Turf War on Stan Event for $50 at stan.com.au/event.