Home » Basketball » WNBL stars make an impact, returning to the big time with bubs in hub

Ashleigh Karaitiana has been starting games for Melbourne Boomers while Steph Blicavs is looking more potent each appearance for the WNBL title favourites, Southside Flyers.

But just getting on the court has been an achievement for the first-time mothers who have their toddlers with them in the WNBL hub in North Queensland. 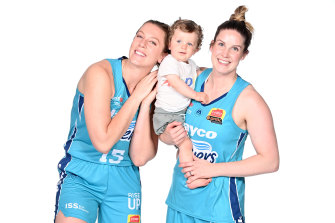 Blicavs, a championship-winner and Commonwealth Games gold medallist, is playing for the first time since having son Arlo, who just turned one, while Karaitiana returned last year to try and help New Zealand qualify for the Olympics after having daughter Kalea who is almost 18 months old.

"If I have a bad game then I get to come home to her, if the coaches aren't feeling great then see her, you see a different side to them," Karaitiana said.

"She provides a lot of good energy."

Arlo is ever present in the social media feeds of his mum's teammates too.

"He has that many new aunties, he is having the time of his life," Blicavs said.

“Especially coming from Victoria where we were in a bit of a lockdown, now we can go to the pool, go to the parks. He is loving it."

The WNBL has long had players travel with children for short road trips or at training but this season is different, with teams moving between Cairns and Townsville and playing a condensed schedule of games entirely in Queensland.

Blicavs, 30, and Karaitiana, 28, didn't have any intentions of stopping their basketball careers post-birth but neither could have planned for such a demanding season.

They also faced a child-minding problem just weeks before the season as a Basketball Australia plan to provide a baby-sitting service during games fell through due to insurance and liability issues.

BA has still paid for carers but the players needed to find them.

Blicavs couldn't bring her husband Kris to Queensland due to his work commitments while both sets of grandparents couldn't leave Victoria. Arlo's aunt Sara Blicavs plays with Steph at the Flyers so couldn't help much either.

Fortunately, the Flyers were able to bring their massage therapist who has doubled as Arlo's carer during games.

Karaitiana was fortunate her partner Matthew Wilson could join her in north Queensland to help, while during games teammate Cayla George, who has strong connections in Cairns and Townsville, helped her source babysitters. 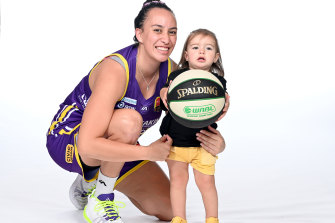 "I found that out while we were in quarantine so that was a pretty stressful 48 hours," Karaitiana said.

"If we could have organised all this beforehand it would have been a lot less stressful but BA did provide the money to pay for anyone we can get.

"I totally understand, it was just poorly timed."

Last year Karaitiana resumed training just five weeks after giving birth so she could help the Tall Ferns make the Olympics, they fell just short in their last qualifying game and she feels far stronger after playing in the Queensland NBL1 season this winter.

"The tough part is when my brain is telling me to do something and my body wouldn't do it," Karaitiana said with a laugh.

"I would be saying 'crossover' but I'd just dribble it off my foot. I'd end up off balance because you end up being top-heavy while breastfeeding."

Karaitiana showed her shooting skills haven't diminished when she knocked down a game-changing 18 points including six three-pointers in her side's upset win 89-72 win over the Flyers last week.

Both Melbourne teams have 3-1 records after four games.

"It's easier in terms of the baby playing a shorter season but it definitely takes a toll on your body," Karaitiana said.

"We have been pretty fortunate as we have Gaylene McKay [a 300-game WNBL player] as our physio, so she has looked after us really well."

Kris Blicavs is a strength and conditioning coach so has worked closely with Steph to regain her physical fitness. Having Sara to work out with during lockdown also helped.

"It has turned out better than I expected," Blicavs said.

“My husband is a strength and conditioning coach so that was an advantage for me, he has all the resources and knows what to do. It’s handy to have a husband who knows what he is doing.”

Blicavs had not played since her Adelaide Lightning fell short to Canberra in the WNBL grand final series in February 2019.

Having Arlo along for the ride has altered her perspective.

"If anything there is less pressure now," Blicavs said.

"I've come back from having a baby, just getting back to playing has been a massive step for me."