Bradley Beal scored 27 points as the host Washington Wizards staved off elimination with a spirited 122-114 victory over the Philadelphia 76ers in Game 4 of their first-round series.

Russell Westbrook made just 3-of-19 shots to finish with 19 points, but he also collected 21 rebounds and 14 assists. It marked Westbrook’s 12th career triple-double in the playoffs, snapping a tie with Hall of Famer Jason Kidd for third place overall in NBA history.

No player has ever reached these thresholds in an #NBAPlayoffs game. (@EliasSports) pic.twitter.com/Boai69yRIu

Philadelphia’s bid for their first postseason sweep since 1991 was severely hampered after Joel Embiid sustained a sore right knee following an awkward fall on a drive to the basket with under five minutes remaining in the first quarter.

The four-time All-Star remained in the game for a few minutes before subbing out and retreating to the locker room. He finished with eight points and six rebounds after erupting for a career playoff-high 36 points in the 76ers’ 132-103 win in Game 3.

The 76ers announced Embiid’s status at half-time as Philadelphia clung to a 61-60 lead.

Washington’s Rui Hachimura collected 20 points and 13 rebounds – including the crucial corner three to ice the game – in his first playoff double-double, while Robin Lopez scored 16 points along with five rebounds and two blocks off the bench for the Wizards, who will visit Philadelphia for Game 5 on Wednesday.

Davis Bertans scored 12 of his 15 points in the first quarter before exiting in the third quarter with a right calf strain.

Tobias Harris recorded 21 points and 13 rebounds for the top-seeded 76ers, who were bidding for their first sweep since eliminating Milwaukee in a best-of-five first-round series in 1991.

Ben Simmons finished with 13 points and 12 rebounds while dealing with foul trouble. Washington elected to purposely foul Simmons, who made 5-of-11 shots from the free-throw line. He is 5-for-20 in the series.

Daniel Gafford’s dunk gave Washington a 112-110 lead with 2:13 to play. The teams each made one free throw before Hachimura sandwiched an emphatic dunk and the huge three-pointer around a Simmons free throw to net the Wizards a 118-112 edge with 45.8 seconds to play.

Westbrook and Beal effectively sealed the win at the free-throw line.

A fan ran on the court in the third quarter before being tackled by security, marking the fifth fan incident of the NBA postseason. 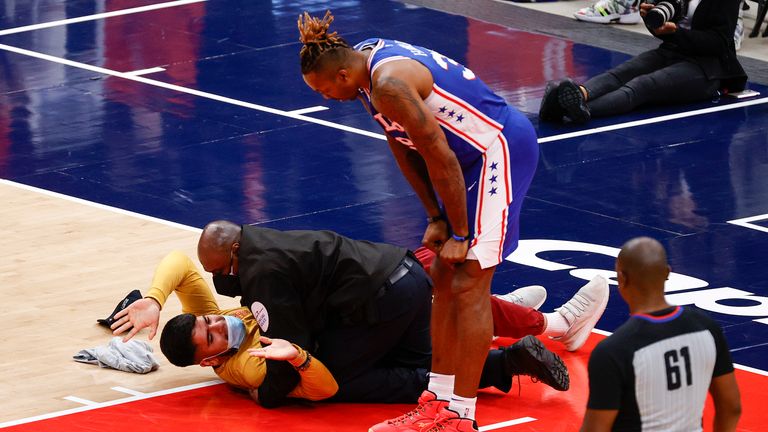 Per the Wizards, the fan will be banned from Capital One Arena and charges are being pursued with the Metropolitan Police Department of the District of Columbia.