NFL fans were left stunned after a member of the ‘Vitaly Uncensored’ group streaked onto the pitch at the Super Bowl on Sunday night.

The man was following in the footsteps of Kinsey Wolanski, who has now become a millionaire after pulling off a similar stunt at a Champions League final.

The American, 24, shot to internet fame in 2019 after sprinting onto the pitch during the Champions League final between Liverpool and Tottenham Hotspur while scantily clothed.

She wore a one-piece which advertised her boyfriend, Vitaly Zdorovetskiy, and his website – ‘Vitaly Uncensored’.

The model, who had appeared in Sports Illustrated and Maxim prior to the stunt, promoted the pornographic website to millions of stunned fans who had tuned in to watch the game.

And on Sunday, the ‘Vitaly Uncensored’ group struck again as another streaker interrupted the Super Bowl in Tampa, Florida.

A man, who is yet to be identified, sprinted onto the field during the fourth quarter of the game, which the Tampa Bay Buccaneers won with a 31-9 victory.

It hasn’t been confirmed what punishment he will receive, but if Wolanski’s case is anything to go by, he’ll be in for a fair bit of notoriety.

Following her 12 seconds of fame during the Champions League final, the American found herself in a Spanish jail with a suspended Instagram account. 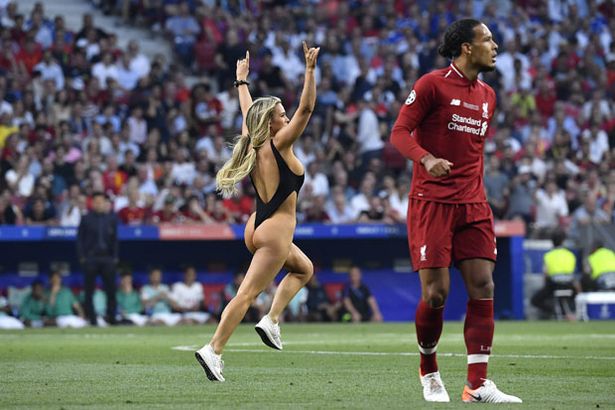 After her account was handed back to her, she quickly gained followers and accrued more than two million followers.

Reports suggest she could now be worth up to £3.5million as a result of her freshly-found fame.

She now lists herself on her Instagram account as “Travel, Stuntwoman, and Investor,” and promotes various products to her millions of followers.

Wolanski has used her new-found fame to create her own line of sportswear, which she usually advertises on her personal account.

While she's calmed down on the stunt-front, she still found time to break into the Skiing World Cup while barely clothed, holding up a sign reading: "RIP Kobe."

Adverts on her Instagram page show her jumping out of planes to advertise energy drinks, eating breakfast in a swimming pool, riding dirt bikes and travelling the world.

She appears to do a lot of work alongside the Instagram user 'justsul', who proudly advertises himself as a "engineer by day, pimp by night", and met up with Manchester United star Paul Pogba at some point last year.

A recent prank video showed the model climbing out of a suitcase at an airport, implying she'd snuck herself in. Nobody in the background seemed to have anything to say on the matter, as the onlookers at the baggage carousel let her go without giving any sort of reaction whatsoever.

Wolanski believes she’ll be able to retire by the age of 30 just off the revenue she gained from sprinting onto the pitch.

One recent video posted to her Instagram account showed her jumping out of a plane with DJ Marshmello.

Her initial punishment for streaking the game in Madrid was a £12,000 fine for violating UEFA rules, followed by a £7,200 fine for breaking ‘free advertising’ rules.