Cambage was reprimanded by Basketball Australia last year for her conduct in the pre-Olympics warm-up clash but was cleared of three other charges.

What Cambage actually said had not been publicly confirmed, but O’Hea, the Opals captain at the time, and speaking on the ABC, said Cambage had told the Nigerians to “go back to your Third World country”. 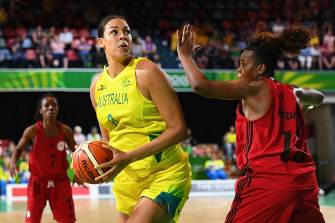 Liz Cambage in action for the Opals.Credit:Getty

However, in a cryptic tweet on Monday, Cambage wrote: “the truth will always come to light, and it ain’t even dawn yet”. Cambage’s manager Michelle Tozer said her client did not wish to further comment.

Cambage’s verbal sparring with the Nigerians led to an altercation between the two sides but Cambage has denied other “rumours” of what allegedly happened. There had been allegations the star centre had also broken protocol and left the Opals’ Las Vegas bubble, but she has denied this.

However, the incident with the Nigerians sparked emotional chaos in the Opals squad, and ultimately sunk their campaign, for they were eliminated in the quarter-finals without their best player.

As reported by The Age and the Sydney Morning Herald in December after it emerged Cambage would not be part of the Opals’ squad for the FIBA World Cup in September, there remained friction between Cambage and team leaders. According to team sources, some teammates are still in disbelief about the whole affair. O’Hea and Cambage, who had been close, have not spoken since the Las Vegas meltdown.

Cambage’s father is Nigerian, and her teammate Ezi Magbegor is of Nigerian heritage.

Now playing with the Los Angeles Sparks, Cambage took aim at the Opals last week during a pre-season media event for the WNBA. She claimed that she was now “protected on a level that the Opals, or the Australian team, never gave to me”, and said she never felt the Opals wanted her “to be the best I can be”.

The Opals, under coach Sandy Brondello, are undergoing a cultural revamp. O’Hea retired from international basketball in March, while the robust Sami Whitcomb, the New York Liberty and Perth Lynx shooting guard, captained the side through last year’s FIBA Asia Cup and the World Cup qualifying tournament in February.

Cambage opted not to return to the WNBL this season, having been a pivotal figure in leading the Southside Flyers to a championship last year.

The Sparks, meanwhile, are undefeated after two games, with Cambage pouring in 22 points on 8-of-11 shooting and grabbing 11 rebounds in an 87-77 win over the Indiana Fever on Monday (AEST).