Ben Simmons’ back injury is a herniated disk, though Brooklyn Nets coach Steve Nash still believes the guard can play this season.

Simmons had an epidural recently that Nash said he believed had relieved some of the pain in his back. Nash had revealed that step after it happened last week, but hadn’t disclosed the nature of Simmons’ injury until Monday, when he confirmed a report by The Athletic.

Nash had previously only said pain in Simmons’ back flared up sometime after the Nets acquired him from Philadelphia on February 10. 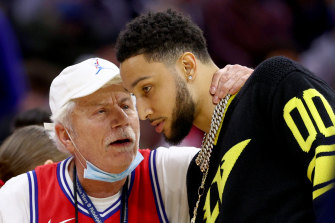 Ben Simmons talks with a 76ers fan in Philadelphia.Credit:Getty Images

“I’m not sure when they recognised it was beyond like a regular back flareup and a herniated disk or whatnot,” Nash said before the Nets played the Utah Jazz.

He said the herniated disk is an injury Simmons had earlier in his career.

Simmons is still not even practicing but Nash hasn’t given up hope the former No. 1 pick can get on the court this season.

“Yeah, I don’t think it changes the outcome necessarily. We still have high hopes that he can come back,” Nash said. “He’s had moments during his rehab where he’s on the court doing some things and it looks like he’s about to turn a corner and then there’s a little setback. So I still feel optimistic that he can play for us.”

Time is running out, though. The Nets had only 10 games left after Monday, followed by perhaps one or two in the play-in tournament it appears they’ll have to get through to reach the playoffs. Nash said he doesn’t think there’s a point the Nets would feel was too late for Simmons to still make a difference, even after being inactive all season.

“I think if he’s able to get back to playing, I think we’d want to incorporate him at any point,” Nash said.

Nash said he believed Simmons had been training hard throughout this season in Philadelphia before the trade, and then his back problems returned and haven’t been able to be controlled enough since to get him back on the court.

Nash had his own back problems at the end of his Hall of Fame playing career, though said all back issues were different so he couldn’t speak much to Simmons’. Nor, despite his optimism that Simmons plays this season, can he be sure how soon Simmons can be ready.

“You just never know. You never know how he responds,” Nash said. “He can feel great and turn a corner in the next week or so, or it could be a longer-term thing. So we just have to be patient and see how it goes.”