When you build a basketball team, balance is a major factor to your success. This is why those $15 social media challenges are so intriguing. Do you opt for five middling players at $3 each, knowing you will never have the best player on the floor? Or do you select two players for $5 then fill out the rest of the roster with $1 and $2 talent?

You have 15 points to build your all-time #NBAAllStar squad. Who are you picking? 🤔 pic.twitter.com/66Ji5WENFv

As basic as the concept is, it is a snapshot of being an NBA general manager. Each team has a salary cap and you can only afford a select number of players of a certain calibre.

In previous seasons, the Brooklyn Nets were earning plaudits for finding $2 players who combined to make a great, unselfish team that overachieved and built up their individual value.

But in signing Kevin Durant, Kyrie Irving and trading for James Harden, the team has flipped those overachievers into three $5 superstars and a mix of $1s.

The Nets are yet to find an elite five-man unit, partly because of their terrible defense, but also because the trio has yet to play many games together – due to coronavirus contact tracing, time off to deal with mental health issues and a trade after the season started.

Most teams in the league have faced issues with players being out for contact tracing and positive coronavirus tests, and several that were predicted to make a leap up the rankings have not been able to do so as a result.

Other regular contenders are lower down the NBA standings while some have ridden out the storm, and a theme among the most successful teams is having a reliable starting five.

The Toronto Raptors struggled to start the year but are slowly turning things around. Head coach Nick Nurse told Sky Sports NBA about needing his starting five to set the tone: “The core of a team is in the starting line up. These guys have been around and the experience is there.

“Our starters need to set the tone execution wise, effort wise. The bench guys need to follow that lead, and I think when things don’t go well the bench follows and plays similarly.”

With more than a third of the season gone, a top five list of five-man line-ups is beginning to emerge. 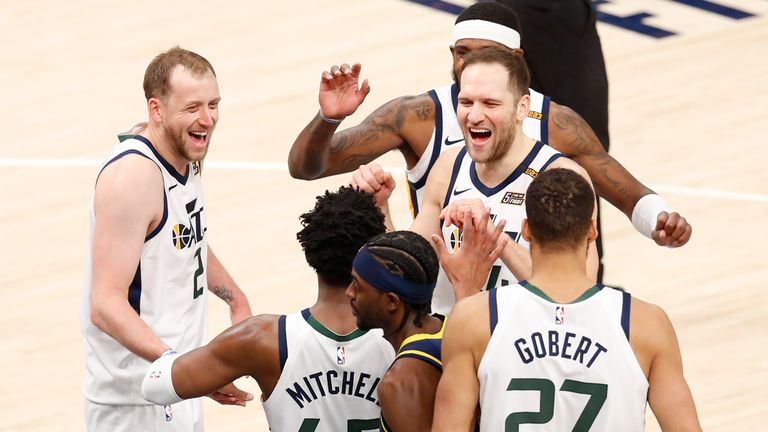 To some, the Utah Jazz sitting at the top of the NBA standings might surprise a few. But this team has something that many others in the league don’t: consistency.

The Jazz have not panicked at any stage during the past few years. Despite being knocked out of the playoffs in heart-breaking fashion, they have continued to build around Donovan Mitchell and Rudy Gobert, as well as doubling down on players they’re familiar with as a franchise.

An upsetting end to last season saw them bet on seeing increased chemistry with Mike Conley after a disappointing first year away from the Memphis Grizzlies last season, and they also brought back long-time Jazzman Derrick Favors after a year with the New Orleans Pelicans.

Hang this play in the Louvre pic.twitter.com/dLUpTlFKfE

Conley taking the reins as point guard has put the rest of the starting line-up in their best position on the court.

Mitchell slides to be a secondary handler who can be a threat on and off the ball, Bojan Boganovic is a prototypical trigger-happy small forward while Royce O’Neale is a great three-point threat but an even better defender, backed up by a top-two defensive big man in the NBA, Gobert.

Even with this elite unit, which leads the league with a +17.9 points per 100 possessions over their opponents, they also have the experience of last year’s playoff ousting fresh in their minds, when Mitchell needed greater support as a scorer.

He told Sky Sports NBA: “We’ve got guys in our second unit who come in and we don’t miss a beat this year. I think that’s pretty special and something that should be emphasised.

“The stars are always going to be stars… but that’s what changes in the playoffs. You know what you are going to get in the primary group, but where do we get different pieces?

“I was a big Miami Heat fan back in the day and there’s that famous Mike Miller shoe game, when his shoe fell off, he had like six threes. But you also had the Shane Battiers and the Ray Allens – you’ve got guys like that making plays. That’s what I think is definitely important come playoff time, even more so than the regular season.”

The Jazz have Jordan Clarkson off the bench, a player with the ability to drop 40 points and Joe Ingles as the gritty, do-it-all multi-positional perimeter threat. Favors adds good support for Gobert while youngsters like Juwan Morgan, Shaquille Harrison and Udoka Azubuike have shown promising flashes. But will they be ready in time for the playoffs?

A team that knows all about the importance of the playoffs is the LA Lakers. In the shortened off-season, the team only got better on paper, swapping out Javale McGee for Marc Gasol, Rajon Rondo for Dennis Shroder, and Talen Horton-Tucker for Danny Green.

There’s a mix of experience, talent and youth to give them a regenerated and upgraded roster to a championship team.

However, it takes time to incorporate the new players into a system, and one thing we have learned about LeBron James’ teams is that he will not be concerned with having a league leading record before the All-Star break.

He, Gasol and Schroder are the only Lakers to have played in all of LA’s games this season, as Anthony Davis is dealing with a strained Achilles that could see him out another few weeks.

Meanwhile, Kentavious Caldwell-Pope has played incredibly well this year, defending the most dangerous wing player and shooting a career best 42 per cent from three, while picking his shots carefully – 96 of his 168 total makes this season have come from beyond the arc.

As a result, in the 20 games this unit has started this season, the Lakers have won 15 of them and have the second best net rating per 100 possessions of +12.5.

The Lakers might not finish with the best regular season record in the NBA, but this team doesn’t need to. James is posting MVP-calibre numbers – even if the counting stats are down on last season.

Everyone knows about the Lakers. Barring any major issues, they are going to be in the Western Conference Finals with a strong chance of making the Finals – even with a sub-par start to the season, they still have the second best record – so fans and the media are looking for other storylines.

When Davis is back, the starting five are healthy and ready to chase a ring. Ignore them now at your peril. Even though CJ McCollum was absence, Damian Lillard was typically excellent and Carmelo Anthony threw it back to his days with the Denver Nuggets, scoring 24 points on 60 per cent shooting from the field, including 80 per cent from three-point range to get the win.

The same starting five followed this up with another loss to the Phoenix Suns. Without Embiid two days later, they lost to the scorching-hot Utah Jazz.

The recent games are a prime example of why you can’t just rely on the starters to get you through a long season.

Mike Scott is a regular bench player, though he has started two games this year, and he explained the importance of role players to Sky Sports: “The bench’s job is to bring the intensity and match the energy of the starters. Keep it going and when we do our job, the starters come back in a finish off the half or finish off the game.”

The 76ers’ preferred starting line-up is +11.4 per 100 possessions – third best in the league – and they have an MVP candidate in Embiid, who is averaging 29 points, 10 rebounds and two assists. He also has a Box Plus Minus of 8 – the points per 100 possessions a player contributed to their team above a league-average player – which is good for second best in the league, behind Nikola Jokic.

Per 100 possessions, this Nuggets unit outscores opponents by 9.3 points and their win-loss record is positive but still mixed.

There have been times when the Denver Nuggets look like a mess this season. A recent example was against the Boston Celtics earlier this week, when the Nuggets needed 43 from Nikola Jokic just to lose by 13 points because the rest of the team barely showed up.

Jamal Murray can have nights where he is out of sorts and even though he managed 25 points against the Celtics, he had nine turnovers.

The problem is that the Nuggets have only seen Murray, Jokic, Gary Harris, Will Barton and Paul Millsap on the court together 16 times when the game is tipped off.

And with players in and out of the line-up, others like Michael Porter Jr, Monte Morris and JaMychal Green have stepped up in the way Philadelphia 76ers’ Mike Scott described.

Even Facu Campazzo has started for the team recently and excited the league with his passing wizardry.

A reminder that Facundo Campazzo has eyes in the back, sides and top of his head pic.twitter.com/ItQhfB6ydw

Despite this, the Nuggets clearly rely on their starting five and while the depth is coming along nicely, the key for this team is getting everyone back healthy after seven players, including Jokic, were on the injury report on Wednesday. The Milwaukee Bucks are a team that have had relatively good health in comparison to the Denver Nuggets, with Giannis Antetokounmpo, Dante DiVincenzo, Jrue Holiday, Brook Lopez and Khris Middleton starting 22 of the team’s 28 games this year.

This familiarity is borne out in the numbers, with the unit outsourcing opponents by 8.1 points per 100 possessions.

One thing that might have held them back so far is the addition of a new point guard. Holiday was one of the most sought after players in the shortened off-season but his presence hasn’t made an immediate impact. The team is no better than last year at this stage of the season.

But you only have to look at Mike Conley with the Utah Jazz to see how it takes time for even the most experienced point guards to master a new system.

Holiday is a clear upgrade at that position compared to last season and the team is better with him in the line-up – he is currently day-to-day so should be back with the team soon after missing the most recent five games, four of which were losses.

As his chemistry with teammates improves, the team should get better in the second half of the season – a feeling shared around the league.

Bucks head coach Mike Budenholzer is also doing something many have been wanting him to do for years: mixing it up.

He has previously been accused of building a system and sticking with it regardless of what is happening on the court, but this year he is experimenting with new defensive schemes – switching more often than his team used to do, and attempting new zone rotations. This will hopefully pay off in the playoffs when the roster is more familiar with the concepts.

Milwaukee has a top five starting five already. They have a $5 player in the two-time MVP Antetokounmpo, a $4 player in Khris Middleton – who is averaging 20 points, five rebounds and five assists while shooting 50 per cent from the field, 40 per cent from three and 90 per cent from the free throw line – with the $3 type of player in Holiday, a $2 star in Brook Lopez, and rounding it out with Donte DiVincenzo, who probably falls into the $1 starter category.

Everyone knows their role in the starting unit, and this balance could result in them being even better by the time the playoffs start, which could see the Bucks reach their first Finals since 1974.