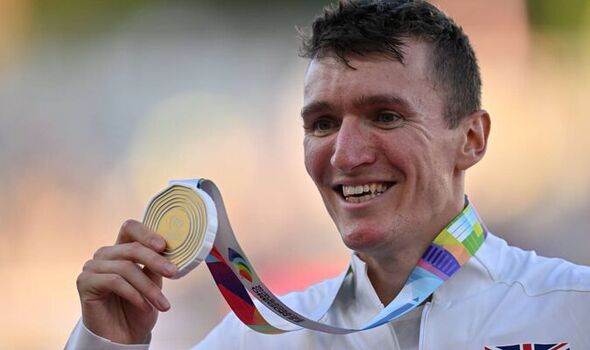 As his son left a star-studded field trailing to seize gold at Hayward Field in Oregon with his fastest-ever career time, Geoff Wightman was also working – as the stadium announcer.

There was initial bemusement in the crowd when the camera broadcasting to the stadium’s giant screen panned away from the first Team GB runner to claim the prestigious world title since Steve Cram in 1983, to the grey-haired announcer nestled on a gantry above the track on Tuesday evening.

But they were enlightened when the 61-year-old told the 20,000 spectators through the tannoy: “I have got to tell you why the camera is on me. That’s my son. I coach him. And he’s the world champion.”

Incredibly both Wightman senior and junior held back tears during a moment that was surely unprecedented in broadcasting and elite sporting history.

But, as Geoff later revealed, he had been preparing for it most of his life.

He said: “I’ve been doing his school sports day since he was about 11 because my wife’s been his PE teacher.”

During the nail-biting final sprint Geoff managed to keep his commentating focus as the 28-year-old journeyman athlete held off Olympic Champion and red-hot favourite Jakob Ingebrigtsen.

Despite bursting with pride his first words were professionalism personified as he confirmed: “Jake Wightman has just had the run of his life,” before admitting: “My voice has gone.”

Jake said: “I was running for my life down the home straight. It is still just shock and disbelief that this has actually happened. It probably won’t sink in until I have retired.”

Jake, who joins names like Steve Cram, Steve Ovett and Seb Coe as middle distance champions, and was born in Nottingham but his family moved to Scotland when he was 10, the nation he will represent at the upcoming Commonwealth Games.

With Geoff a former marathon ace and mum Susan, 61, having represented Team GB as a long-distance runner, track events were clearly in his genes and he joined Edinburgh AC as a schoolboy – the club he still represents.

Club President Yvonne Jones said: “It’s amazing. He’s very loyal to the club. He still wears that vest and is proud to put it on.” 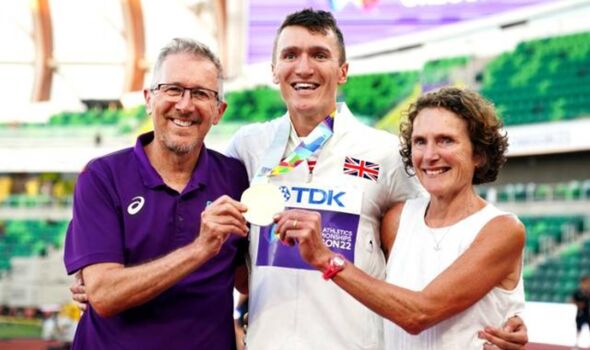 “I don’t see him a lot but I am in touch with him regularly. I owe him a Mars bar every time he gets a PB. I’ve been doing that since he was a kid.”

“He does occasionally say, ‘Remember you owe me that Mars bar!’.”

The triumph was also celebrated at his former school.

Anthony Simpson, principal of Erskine Stewart’s Melville Schools, said: “We could not be prouder of Jake.”

“What an inspiring reminder to every child that if you have a real passion for something and give it your all, you can achieve anything you set your mind to.”

The win ranks among Britain’s most surprising gold medal in the 39-year history of the world championships and it was one UK Athletics clearly didn’t expect.

For they had already booked Wightman on a flight home on Wednesday at 6.35pm local time – an hour after the 1500m medal ceremony was due to take place. That meant the ceremony had to be fast-forwarded to enable him to catch the flight.

Watching from the stands was jubilant mum Susan while twin brother Sam, an actor and former junior runner, was busy retweeting posts of his sibling’s win.

Nine days ago his dad posted a pic of the pair as toddlers resplendent in identical Tartan waistcoats.

He wrote: “Many happy returns. Your dear mother has got you some new matchy matchy waistcoats for your birthday.”

Mum Susan represented Wales at the 1986 Commonwealth Games before representing Team GB at the 1988 Seoul Olympics – the year she became the first British female to run a sub-70-minute half-marathon in the Great North Run.