Home » Basketball » Pass the crown: Kings down Hawks to clinch shot at history

The Sydney Kings will have the chance to break a 17-year championship drought after booking a place in the NBL grand final with an electric 99-87 win over the Illawarra Hawks on Sunday night.

A sense of history surrounded the pre-game, with Andrew Bogut, the last Kings player to win the league’s most valuable player award back in 2018-19, presenting Jaylen Adams with the Andrew Gaze Trophy in the pre-game. 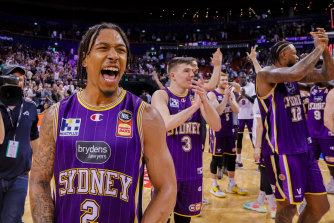 The Kings crashed out of the playoffs in straight sets to Melbourne United in Bogut’s MVP year, but Adams will have the chance to write his own name into the history books if he can lead them to their first NBL championship since 2005.

It was a battle of the defensive powerhouses to start the first period. Antonius Cleveland, who was named defensive player of the year on Wednesday, opened the scoring off his own defensive work and had four steals for the quarter. Xavier Cooks was damaging at both ends with five rebounds and eight points in the first period, combining with Makur Maker to make the Hawks work for every bucket.

Justinian Jessup, who dominated the first half the last time the Hawks played at Qudos Bank Arena, had a quiet start by his standards but came up with three points to push his side into the lead going into quarter-time.

The Hawks were determined to avoid a repeat of their disastrous second quarter in Game 1, where the Kings piled on 30 goals to the Hawks’ nine to effectively decide the game. Tyler Harvey knocked down three points to start the quarter and led the charge with two steals as the Hawks put on a defensive masterclass. The visitors took full advantage of Cooks and then Adams spending extended periods on the bench, making nine steals on their way to a 10-goal lead at half-time. 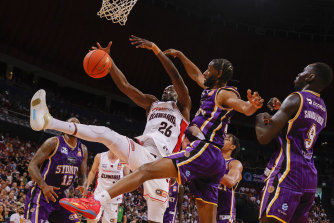 Adams didn’t let three fouls next to his name affect his game as he dragged his team back into the game, relentlessly attacking the rim and causing all sorts of problems for the Hawks defence.

No team had ever come back from 10 points behind at half-time to win a play-off game in the 40-minute era, but this Kings outfit has something special, and in front of a passionate home crowd, you got the sense that anything could happen.

Jarell Martin led the scoring in the third period, draining a three-pointer with the first shot of the half as he powered his way to 10 buckets for the quarter. Back-to-back three-pointers from Duop Reath kept the Hawks within touch, but Adams and Ian Clark scored key buckets to give their team an improbable two-point lead going into the last break.

Ian Clark, an NBA championship winner with the Golden State Warriors, showed his experience to start the last period, knocking down a three-pointer to calm some nerves. Xavier Rathan-Mayes iced three from the corner to keep the Hawks within touch before Wani Swaka lo Buluk drew two free throws attacking the rim. Clark again showed a cool head to score two free throws and push the Kings’ lead to six points before Adams all-but sealed the game with a clutch three points.

The crowd of 9,824 shouted ‘MVP’ as Adams slotted two free throws to finish with a game-high 29 points in an historic Kings victory.

The Kings will face either Melbourne United or the Tasmanian JackJumpers in next week’s decider.