Dyson Daniels could be continuing the trend of young Australian guards rising up the NBA draft standings.

The 19-year-old Bendigo product did so well at the NBA draft combine last week, some teams are viewing him as a legitimate top-five prospect according to respected talent scout Jonathan Givony. 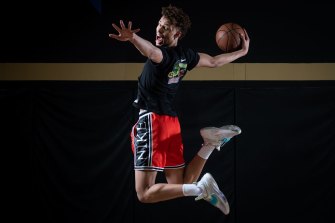 Givony tweeted that it was his view Daniels had taken the biggest leap of any player at the combine and was starting to “generate some top-five pick buzz”.

Most experts believe the top three picks are locked for the best three big men in Jabari Smith, Chet Holmgren and Paolo Banchero but there could be interest in Daniels from four onwards depending on how he performs in workouts and team interviews in the lead-up to the draft on June 24 AEST.

The Athletic reported Daniels had met with nine teams including Sacramento (pick four), New York (11), Atlanta, Cleveland, Milwaukee and Toronto, although history says some teams won’t publicly reveal their interest, such as Oklahoma City Thunder did with Josh Giddey last year before taking the Melbourne teen with pick six.

Jokic polled 476 votes compared to Embiid’s 414. With one centre spot reserved for each of the first, second and third teams, Embiid, second in MVP voting, was relegated. 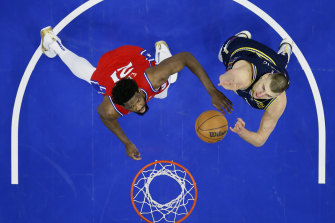 The league has maintained the positions after fears big men could be left out of the major spots should voters flock towards more athletic-looking guards and forwards.

Too small? Reid proves them wrong with Opals call-up

Too small, not athletic enough, can’t shoot – Steph Reid recalls all the reasons why she never made a state team as a junior player in Victoria.

Each time the point guard was rejected, she went back to the practice court and worked harder on her game.

The 168-centimetre playmaker took her talents to US college basketball and then worked her way up from the bench at the Dandenong Rangers and Southside Flyers to starring with Townsville Fire last WNBL season. 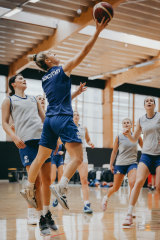 Reid’s form was so consistent the Australian Opals called her into the squad and with several players away in the WNBA, she finds herself at her first Opals camp this week and, hopefully, having the chance to play for the side in the three-game series with Japan this coming week.

“I’ve never been to a junior nationals or made a Vic Metro team so I’ve always tried to be the hardest worker and make sure that’s something that I live by,” Reid told Hoops Heaven.

“I was always around the top 25 players [when state teams were selected] but I would get to the last round and get cut. I was told I was too small, my wingspan wasn’t long enough, I wasn’t athletic enough or I couldn’t shoot the ball well enough – that has driven me to be more motivated and work on my game.

“How many players reach this point [The Opals] and can say they never went to a nationals? I try to pass that on to kids because lots of them get cut from teams each year.”

Reid praised the Townsville Fire and coach Shannon Seebohm for helping her take her game to new levels and giving her an extended role.

Reid will be primed to give her all should the Opals throw her onto the court for her national debut during the Japan series.

“I’m just excited to be on the court with the girls and wearing the green and gold,” Reid said.

“I don’t know how much opportunity we’re all going to get but my approach is to stay ready, stay engaged, be super positive and the best towel waver I can be. If I’m on the bench, I want to make sure the girls feel my energy at all times.”

The Opals play Japan at Sydney’s Quaycentre on Friday at 7.30pm and Sunday at 3pm, before playing in Newcastle on Tuesday at 7.30pm.

NBL free agency has got off to a modest start as teams hold fire, with several stars looking to test the waters in the NBA pre-season and clubs keen to scout new import talent at the NBA Summer League.

Anthony Drmic announced he would be returning to the Adelaide 36ers after two years with the Brisbane Bullets, signing a one-year deal with a mutual option for a second.

The Illawarra Hawks made a smart move in signing Wani Swaka Lo Buluk from NBL champions the Sydney Kings, with the defensive ace lured with the promise of a bigger role. The Kings re-signed back-up point guard Shaun Bruce for two more years.

Perth guard Kyle Zunic has been rewarded with a two-year deal and elevation to the main roster following a strong season replacing multiple injured players.

New Zealand Breakers have also made a positive start with point guard Will McDowell-White signing for another season, adding to his 44 games with the club.

McDowell-White, son of former AFL star Darryl White, shapes as a key player for the club.

“I sat down with a couple of teams and did a few Zoom calls. There were some really good options and really good offers, and the decision was tougher than I thought it would be,” he said.

“But I just knew coming back was the best option for me and the best way to progress my career.

“I think my development has skyrocketed under [head coach Mody Maor] in the last one-and-a-half years; maybe with another year under him I can really take off.”