The 203cm playmaker is considered a possible lottery selection. He is projected to be tabbed 13th overall in the mock draft by nbadraft.net. 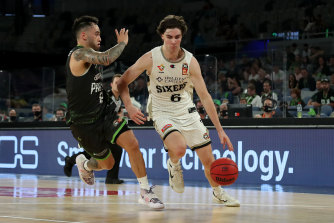 Josh Giddey of the 36ers taking on the South East Melbourne Phoenix in March.Credit:Getty Images

Giddey, 18, is averaging 11.1 points, 7.4 assists and 7.1 rebounds in 23 games for the Adelaide 36ers in Australia’s National Basketball League.

“The league welcomed me with open arms and I know I’ll end my time here as a better person and player,” Giddey said on Twitter.

“I feel like I’m ready to look toward the next step in my career. My lifelong dream has been to play in the best professional league in the world and, after speaking with those around me, I believe I’m ready to take that leap.”

Giddey recorded a triple-double of 12 points, 10 rebounds and 10 assists in Adelaide’s most recent game.