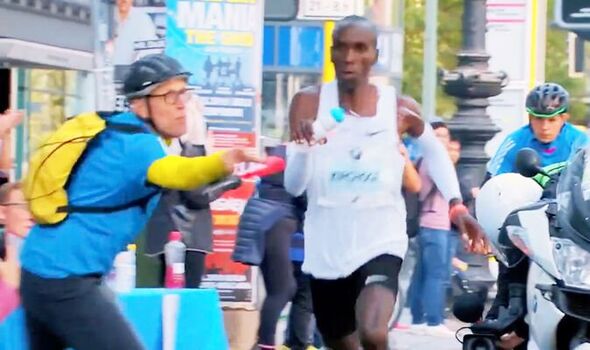 One of the secret weapons behind Eliud Kipchoge’s latest world record run has described his elation at doing his job successfully on Sunday. The Kenyan icon, 37, won the Berlin Marathon in a time of 2:01:09, beating the previous marker he set on the same course in 2018 by 30 seconds.

And following his latest foray into the record books, a heartwarming clip has gone viral on social media, showing Kipchoge being handled a bottle as he steams around the course. The person handing it over is then seen celebrating with his fist up after the smooth exchange.

Sports journalist Usher Komugisha uploaded the footage on Twitter, explaining: “Meet Claus Henning Schulke, a 56-year old German triathlete from Berlin who is Eliud Kipchoge’s Bottle Handler. His celebration after Kipchoge gets the bottle is a thing of beauty. Sport is absolutely powerful. Incredible scenes.”

Henning Schulke has provided personal bottle service for Kipchoge three times, including his 2018 world record effort. And in a video feature for the Berlin Marathon, he explained the complexities, including athletes’ names being written on their outstretched forearms so it’s easier to identify the correct bottle.

JUST IN: Serbia basketball star’s interview disrupted as Mali teammates throw punches at each other 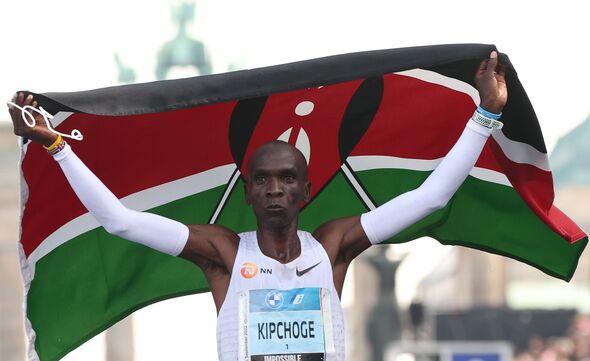 “You have to imagine they are running along with more than 20 kilometres per hour,” he explained. “You have to keep eye contact. Does he see me? I shouted at him because he was moving in an inner tunnel. Then you present the bottle to him. He grabs it and the handing of the bottle has worked. It makes me happy every time.

“Then you have to rush to your bike and sprint to the next water station 5km away, passing all kinds of lead trucks and bikes, meaning you have to ride about 40 km [per] hour and then start the same procedure over again. After the race, I am quite exhausted.” 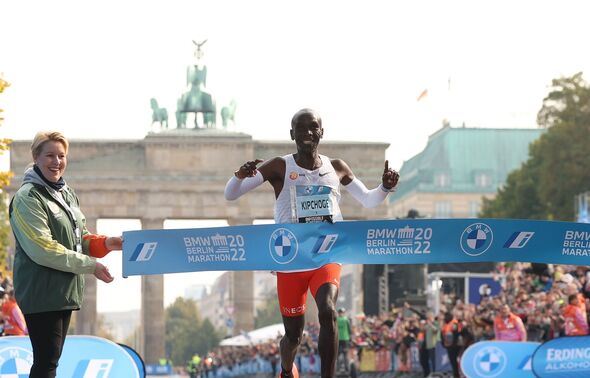 His contribution hasn’t gone unnoticed by Kipchoge, who in 2019 broke the two hour mark for a marathon in a special challenge run. However, it was recognised as a record under IAAF rules due to the setup of the run.

He’s previously labelled the Kenyan’s bottle man is ‘hero’, adding: “My biggest remembrance of Berlin is the guy who was handing me water, still my hero up to now. The way he was handling and acting and talking was unbelievable.”