When the Sydney Kings won their third NBL title in a row in March 2005, few would have thought they would have to wait another 17 years to taste the ultimate success again.

For three quarters of game three against the Tasmania JackJumpers, it looked like they may have had to wait a little longer, but Xavier Cooks and Ian Clark stood up when it counted, leading the Kings to a famous 97-88 win to sweep the title in front of the largest grand final crowd in the league’s history. 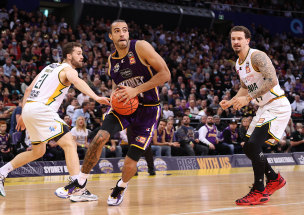 The JackJumpers led for three quarters despite the late withdrawal of talls Fabian Krslovic and Jack McVeigh (flu) leaving them seriously undersized. But this is a team that had to win all six of their last regular-season games and overcome a loss in game one of the semi-final against Melbourne United just to earn a shot at a fairytale title in their maiden season.

The visitors drew first blood, putting a quickfire five on the board before the Kings registered a score.

Captain Xavier Cooks and Makur Maker, coming off the bench, led the charge for the Kings early, at times fighting each other for offensive rebounds against the undersized JackJumpers as they bullied their way to seven first-quarter points each.

With Josh Magette creating chances and Josh Adams continuing his strong form from the three-point line, the JackJumpers were out to spoil the Kings’ victory lap, helping themselves to an unlikely three-point lead at quarter-time.

The Kings came at them to start the second period, but the undermanned JackJumpers pulled heroes from seemingly nowhere. MiKyle McIntosh, Clint Steindl and the ever-present Adams all shot three-pointers as the visitors piled on 12 unanswered points to establish an eight-point lead halfway through the term. The Kings were dominant off the glass, with 24 rebounds to 14 at half-time, but the JackJumpers made six steals to the Kings’ none on their way to a one-point lead at the main break.

The JackJumpers were determined to avoid a repeat of their performance in Hobart, where they let the Kings run over the top of them after leading at half-time. Josh Magette, after a quiet game two, scored eight points and helped himself to two steals as the JackJumpers held stubbornly to their lead.

Enter Ian Clark. The former Golden State Warrior failed to fire in game two as he started for the injured Jaylen Adams, but showed his championship credentials with two clutch three-pointers to fire the Kings into the lead. Martin took the margin to five points with a score off the rebound as the 16,149 in attendance started to believe the title was within reach.

Clark threw down another three as the JackJumpers tried to cut the margin with wild attempts from outside the arc. Jarred Bairstow made one stick with just under three minutes on the clock but Cooks, leading the way with his third double-double of the series, dunked to set off celebrations among the 16,149 in the crowd – the largest attendance for a grand final in NBL history.

Cooks, Martin and Clark all finished with over 20 points in the absence of league MVP Jaylen Adams, who didn’t recover from a hamstring strain sustained in game one.