Kyrie Irving’s return to the Brooklyn Nets is starting with a trip to the NBA’s health and safety protocols – and Kevin Durant is joining him.

The Nets’ outbreak worsened on Saturday, US time, when they announced both stars were in protocols, giving them a league-high 10 players on the injury report for that reason. 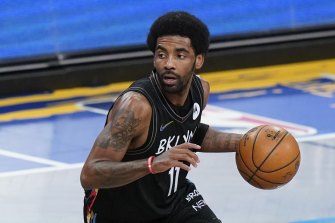 Kyrie Irving is in health and safety protocols.Credit:AP

“These are unforeseen circumstances and I hate to say it, it’s almost like we’ve gone back to six months, a year ago unfortunately with the cases rising,” Nets general manager Sean Marks said.

The Nets decided Friday that Irving would rejoin them for practices and road games, though he remains ineligible to play at home because he hasn’t met New York City’s COVID-19 vaccine mandate for athletes playing in the city’s public venues.

The Nets determined before the season that Irving wouldn’t be a part-time player and wouldn’t be with the team unless he could play in all their games. But concerned with the heavy burden Durant has faced — his 37 minutes per game are second in the league — and needing to add a body while they keep losing them, they said the point guard would be back.

Durant already was scheduled for a night off to rest on Saturday against Orlando on the opening night of a back-to-back. Instead, he became ineligible to play anyway when he was added to the injury report.

Irving first needed to get tested to be cleared to play and apparently he either tested positive or had an inconclusive result. The Nets also acknowledged the risk of bringing Irving back at this time, with Marks saying he hadn’t spoken to him about whether he intended to get vaccinated.

“There’s also a risk for Kyrie when a guy comes in and if they’re not vaccinated,” Marks said. “I don’t want to get into those type of discussions but that’s a risk for him coming into this environment, not just the team and so forth. But we’re all well aware of the status and his status and moving forward and how we’ll navigate this as best we can.”

Needing to have eight players to start a game, the Nets scrapped their plan to rest Patty Mills and said he would be available. They also signed swingman James Ennis III and guard Shaquille Harrison to 10-day contracts.