Home » Basketball » Cut after 31 minutes: Heal on the outer after shock roster move

Shyla Heal, one of the rising stars of Australian basketball, has been cut by WNBA franchise the Chicago Sky after playing just 31 minutes across a span of four games.

The 19-year-old daughter of Boomers icon Shane Heal was drafted with the eighth overall selection in the WNBA draft in mid-April, traded to Dallas and then waived barely a month later. 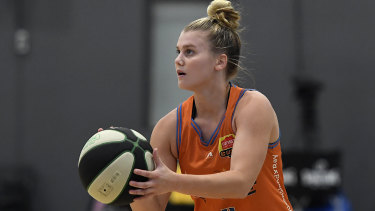 Shyla Heal during her stand-out campaign with the Townsville Fire.Credit:Ian Hitchcock

All told, Heal – the youngest player in the WNBA – spent only two weeks with the Sky after missing training camp reportedly due to visa issues. She learned of the Sky’s brutal roster move while at the airport and preparing to board a team flight.

Shane Heal spoke on social media about the reality facing his daughter.

“Tough break for Shyla,” he tweeted.

“[She] was traded and waived today [after] 2 practice sessions & 20 odd minutes.

“The team lost 5 straight home games so they cut 2 first round picks.

“Great experience that will make her even tougher. It’s a business there. [I’m] super proud & know she will kill it there.”

With his trademark honesty, Heal responded to one Twitter user: “Being cut at the airport before boarding for the road trip is character building. I luv her resilience. Being 19 & sitting in an apartment alone in Chicago is tough too. [But] she will be ok. Lots of people going thru more difficult things in life. We appreciate the support.”

Heal’s former Boomers teammate and fellow Australian basketball icon Chris Anstey cut straight to the point through his own Twitter account – garnering plenty of support in the process.

“The @chicagosky drafting and then cutting a 19yo for lack of experience is horseshit as a GM, as a coach, as an organisation and even more so, as human beings.”

“I’ll be a little more direct than others,” he said.

“The @chicagosky drafting and then cutting a 19yo for lack of experience is horseshit as a GM, as a coach, as an organisation and even more so, as human beings.”

Chicago traded Heal, along with a 2022 third-round pick, to Dallas for another guard, Dana Evans. Dallas then waived (cut) Heal.

“We don’t know how long the adjustment period will be whether it’s 30 minutes, 30 days, 60 days – we don’t know. The one thing we know is we have confidence in her and we know she can be a good player in this league,” Wade had said.

The promising star provided her own thoughts about the cut through social media, posting on Instagram: “It wasn’t the ideal start missing Pre season and not getting many practices with the team but that’s life. This set back is exactly what I needed. Not many 19 year olds get a taste of the best league in the world, if at all … and now I’ve NEVER been so motivated! I can’t wait to show people what I can really do.”

She has signed on with the Sydney Uni Flames, where her father is the new coach, for the upcoming WNBL season.

Heal made her debut in the competition at just 14, and last year was named the WNBL’s Youth Player of the Year after a stand-out campaign with the Townsville Fire.

She is one of only four Australian players – along with Lauren Jackson, Liz Cambage and Alanna Smith – to be selected in the top 10 of the WNBA draft.