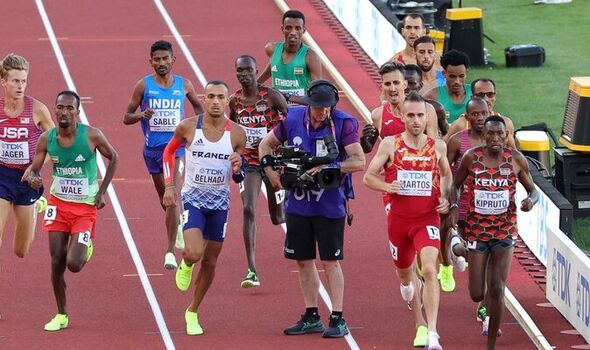 The men’s 3,000m steeplechase was incredibly disrupted on Monday evening when a camerman wandered onto the track with all runners having to take evasive action to avoid a nasty collision. The steeplechase event had thousands of fans in attendance cheering on the runners, including Olympic champion Soufiane El Bakkali.

The runners were just starting to pack together on the first lap when the bizarre incident occurred. The cameraman was standing in between lanes one and two – directly where the steeplechase runners were heading.

He was clueless to his surroundings as the runners had to quickly spread out to avoid a collision which could have easily ended anybody’s race. American Evan Jager had to take the widest route of them all, heading out to the fourth lane.

Other runners could be seen shouting at the cameraman to move out the way but he remained motionless as they raced past him. The cameraman was attempting to film the women’s triple jump, which was taking place on that side of the track. 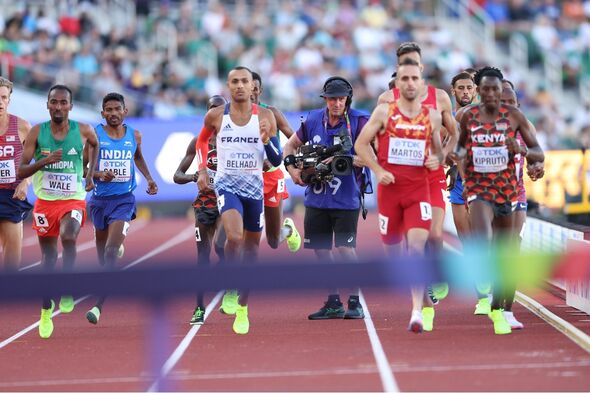 But he’d clearly not been made aware by his broadcasting team that the steeplechase had started. Jager, who finished sixth in the race, said: “I was a little worried that he was going to dart one way or another, right at the last second.

“But thankfully he didn’t realise we were there until we all passed him.” Incredibly, the incident failed to disrupt the race too much, although it was unusually slow through the first few laps.

Olympic champion El Bakkali of Morocco left it late in the last lap to make his move before running clear of the pack to win his first world title. Lamecha Girma was powerless to stop the Moroccan runner winning and had to settle for silver for the second World Championships in a row.

“The course was very tactical, slow. We had very good runners like defending champion Kipruto,” said El Bakkali. “I positioned well in the last lap. I am very strong in the 400m and it worked out for me.”

The World Championships continue throughout the week before the final events late on Sunday evening. The British athletes competing this week will then have just a few weeks to recover before the Commonwealth Games get started on August 2 in Birmingham.