Home » Basketball » Bucks come back, Aussie grabs US chance and is an NBA move on cards for grand final MVP?

As a junior player, Xavier Cooks was so unassuming he doubted he would be good enough to play basketball at the elite level.

But his dad Eric, a long-time Ballarat Miners and Illawarra Hawks player and coach, saw good traits in his son and knew that with a growth spurt, he could become a valuable player. 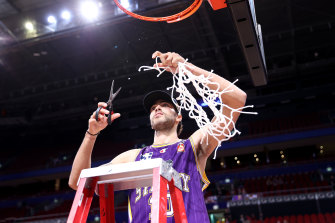 “I was talking to him about what he needed to do to play at the next level and he was just being frank. But he said, ‘I’m not in the two or three best players on my team, and you are lucky if two or three guys will make the next level. So why do you think I can move up?’” Eric Cooks told Hoops Heaven on Thursday.

“For one thing – I knew he would grow. He was a small player, he played guard in a lot of those teams and he was a decent shooter, not a great shooter. I get why he thought that, but we made a pact that day that if he did the things I suggested, then I guaranteed he would make it that next level. We shook hands and went from there.”

On Wednesday night, Cooks captained the Sydney Kings to their first NBL title since 2005 and won the Larry Sengstock Medal as grand final MVP as they beat the Tasmania JackJumpers 3-0 in the best-of-five series.

Hopefully, Cooks can follow last year’s Sengstock medallist, Jock Landale, into the NBA for next season, though it’s too soon to know if that move will become a reality or not.

“The NBA has been a massive dream for me since I was a little kid. So if that comes up, I’m gonna take that, but I mean, it’s gonna be tough to leave Sydney,” Cooks said on Thursday.

“I’ve loved it here, everyone’s super friendly, everyone loves me, I love everybody, so it’s gonna be tough to leave. But it’s a business and we’ll see what happens, but I’m just trying to cherish this moment while we’re here right now.”

Cooks, now 203 centimetres tall, made his name by starring at little-known Winthrop University and then with Wurzburg in Germany before making the Australian Boomers roster for the FIBA World Cup in 2019.

But just days after making that team, Cooks injured his knee at training, which cost him a World Cup appearance and a deal in France. When he recovered he signed with the Kings for the 2019-20 season.

He was starting to return to his best ahead of the 2020-21 season when he flew high and landed on someone’s foot during pre-season which resulted in a foot injury that restricted him for much of that campaign.

Cooks relied on his basketball smarts and determination that season as confidence in his athleticism took some time to return. But this season he has shone with the Kings, playing as a stretch power forward and leader at both ends of the floor.

He threw down a two-handed dunk in the final term of the deciding game – the sort of athleticism that was beyond him when he first returned from his foot injury.

He praised physiotherapist David Hillard for his support in getting back to his best and he had faith his athleticism would return.

“They were some dark days, just sitting in bed not being able to move for a while and all that kind of stuff, and that makes this moment even more sweet,” Cooks said.

If the NBA is next for Xavier, then Eric will be watching on with pride.

WNBL MVP Anneli Maley has made the most of a second chance via an unexpected WNBA debut with the Chicago Sky last week.

Maley was put on waivers by the Sky just days before the season tipped off, but was brought back as the team battled injuries and players returning late from Europe for its opening games.

The 23-year-old played 18 minutes off the bench, posting two points, four rebounds and three steals as the Sky almost upset the Los Angeles Sparks before going down 98-91.

The Sky re-signed Maley, daughter of former NBL star Paul Maley, following her performance, though what happens when their other players return remains uncertain. 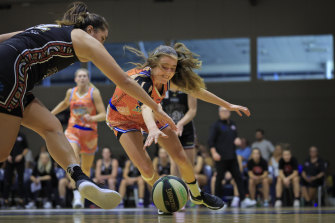 Anneli Maley in action with the Spirit in the WNBL before her move to Chicago.Credit:Getty Images

“She was MVP in Australia because her motor is so high and when you have a high motor, you will see improvement,” Wade said after the Sparks game.

“She has been showing us this stuff every day and I should have gone to her earlier, but I stayed with the pecking order and leaned on experienced players. But she is too naive to care about experience, she just goes out there and balls.”

Giannis Antetokounmpo was having his best shooting night of the play-offs. Milwaukee dominated on the boards. And still the Bucks trailed Boston by 14 points in a game that could send the defending NBA champions to the brink of elimination.

That’s when Jrue Holiday showed the defensive player of the year a thing or two about defence. 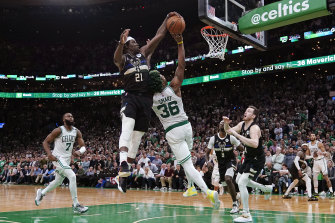 “Obviously, in Boston you’re down 14 in the fourth quarter, people would say everything’s against us. But we come together,” said Holiday, who also hit the tying three-pointer with 43 seconds left. “We live and die like that.”

Antetokounmpo had 40 points and 11 rebounds, making 16 of 27 shots – including a long three-pointer to make it 105-102 with 1:40 to play. Holiday finished with 24 points, eight rebounds and eight assists and Portis added 14 points and 15 rebounds. The Bucks can advance to the eastern conference finals with a victory in game six at home on Saturday (AEST).

Jayson Tatum scored 34 points and Jaylen Brown had 26 for the Celtics, who need a win in Milwaukee to force a decisive seventh game back in Boston.

The Celtics led 93-79 early in the fourth before the Bucks closed the gap, tying it at 105 with 43 seconds to play on back-to-back three-pointers from Antetokounmpo and Holiday. Tatum hit a pair of free throws to give Boston back the lead.

Antetokounmpo went to the line with a chance to tie it and made the first, then Portis grabbed the rebound of the second and put it in off the backboard to give Milwaukee their first lead since early in the second quarter.

Smart drove to the basket, but Holiday blocked him and came away with the ball, throwing it off the Celtics guard while falling out of bounds.

Pat Connaughton made a pair of free throws with six seconds left, then Holiday stole the ball from Smart on his desperation dash for a potential game-tying three-pointer. The Celtics committed eight of their 10 turnovers in the second half and gave up a 49-36 rebounding edge in all.

Naismith hall of famer and NBA great Bob Lanier has died at 73 after a short illness.

Lanier starred with the Detroit Pistons and Milwaukee Bucks from 1970 to 1984 and served as NBA Players Association president before becoming a global ambassador and special advisor to NBA commissioners David Stern and Adam Silver.

Lanier was one of the first ambassadors for what is now NBA Cares leading the Stay in School initiative among other programs.