After hosting a two-hour Board of Governors meeting on Friday, the NBA does not have definitive clarity both on when it will resume the 2019-20 season and what the format would entail, a person familiar with the details told USA TODAY Sports. The person was granted anonymity because he was not authorized to discuss internal matters publicly.

NBA Commissioner Adam Silver received what the person described as “really good feedback” from the league’s 30 owners in the virtual meeting on various scheduling proposals as well as the logistical and financial implications of each one. It is not clear what that feedback entailed, but the person added there is “no real consensus view” among the league’s 30 teams.

The NBA plans to have follow-up talks with the league’s players union, general managers and owners, but it was not immediately clear when those calls would take place. The league is expected to finalize decisions soon after announcing last week that it has had “exploratory conversations” with Disney about “restarting the 2019-20 season in late July” at ESPN’s Wide World of Sports Complex in Orlando, Florida. Those games would take place without fans, and would require players to undergo rigorous testing and remain under quarantine at the complex’s facilities and nearby hotels.

Opinion: NBA won't be able to please everyone as it faces tough decisions on resuming season 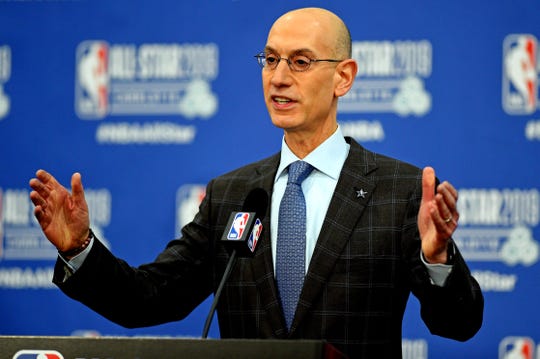 Those in NBA circles did not anticipate that the league would definitively decide the fate of the 2019-20 season following Friday’s meeting. After talking with the league’s players union and general managers this week, the NBA wanted to brainstorm and talk with the league’s owners about various proposals.

The NBA has not ruled out any proposals, but some possibilities have emerged. The NBA could have all 30 teams resume the regular season to determine playoff seeding. The league could host a play-in tournament, both to exempt lottery-bound teams from traveling and allow playoff bubble teams a chance to secure a postseason spot. The NBA could jump right into the playoffs, either in a traditional or reseeded format. The NBA could have teams practice on site or train at their respective practice facilities before going to Orlando.