LeBron James was ejected from the Los Angeles Lakers’ game with the Pistons in Detroit after drawing blood on Isaiah Stewart’s face when they were tangled up while boxing out for a rebound late Monday morning (AEDT).

James’s left elbow and hand appeared to make contact with Stewart above the neck, sending him into a bloody rage. Detroit’s center had to be held back more than once, keeping him separated from the NBA superstar. 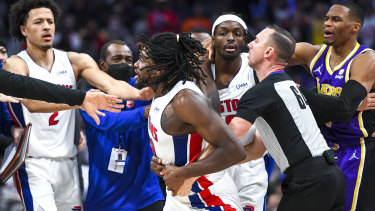 Stewart was also ejected from the game early in the third quarter. Lakers guard Russell Westbrook was assessed a technical after the officials reviewed the play and the fallout from it.

James was escorted off the floor and fans did not throw anything at him as he walked toward the team’s locker room. The Lakers went on to win the clash 121-116 off the back of 30 points, 10 rebounds, four steals and five blocks from Anthony Davis, and a 26-point near triple-double from Russell Westbrook.

A cup was tossed from the stands in suburban Detroit on an infamous night on November 19, 2004, triggering perhaps the worst brawl in US sports history when a melee with the Pistons and Indiana Pacers spilled into the stands – later to be known as ‘The Malice at the Palace’.