Dual world champion javelin thrower Kelsey-Lee Barber has tested positive to COVID-19 on the eve of the Commonwealth Games but is still expected to compete.

Barber is asymptomatic but has tested positive to a routine test.

While there are tight rules around mask-wearing and restrictions on the Australian athletes attending other sports as spectators to minimise exposure and spread, the Commonwealth Games Authority has not barred COVID-positive athletes from competing if they are asymptomatic.

The news comes alongside confirmation Olympic bronze medal-winning decathlete Ash Moloney, who was forced to withdraw from the World Championships last week mid-competition due to a knee injury, has returned to Australia and will not compete at the Commonwealth Games.

“Kelsey-Lee Barber is not out [of the Games],” Australia’s high-performance manager Andrew Faichney said. “We are just working through with CGA what the requirements are for her being able to compete and there are some protocols as far as the Australian organising committee are concerned, but my understanding is she is not ruled out from competing at all.

“I have to reconfirm but I think the organising committee has said that if an athlete is well and healthy enough, then they are going to be able to compete and so that is what we are working through. But she has also got it early enough that she might be able to compete anyway.” 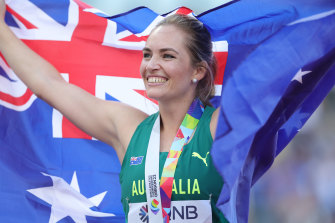 The women’s javelin final is not until the final day of competition on the track on Sunday, August 7.

At last year’s Tokyo Olympics, athletes who tested positive were not allowed to compete in track and field.

Moloney had hoped to back up from the World Championships and compete at the Commonwealth Games where he was likely to be a serious gold medal chance after Canada’s Olympic champion Damian Warner was ruled out with injury.

He has returned to Australia and will consider whether he needs surgery for the persistent knee problem. 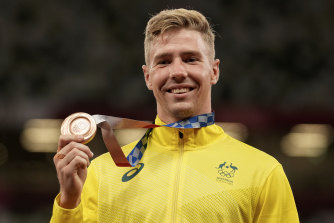 Ash Moloney with his decathlon bronze in Tokyo last year.Credit:AP

“We haven’t thought about surgery yet, it’s just so soon. Once everyone is back we will have a good look at it, but he has a great team around him and we will discuss what it is we need to do to get him robust enough that he is able to get through,” Faichney said.

“It’s just a shame he was not able to do it this time around, doubly so because he was looking at coming up here as well as Oregon.”

Two other Australian decathletes, Olympian Cedric Dubler who finished eighth in Oregon and Daniel Golubovic who came 14th, are both backing up from strong performances and competing in Birmingham.

The withdrawals come after three other members of the athletics team – hurdler Liz Clay and runners Joe Deng and Riley Day – had already pulled out of the Commonwealth Games through injury.

Despite the absences, Faichney said Australia could still top the medal table in athletics in Birmingham.

“I think we are coming off a World Championships where we were really successful so we are really well-placed to be right up hopefully on top of the table as far as athletics are concerned,” Faichney said.

“We have a variety of athletes who have done well over the last couple of years and have done well coming to these games on the back of the championships and we are going to be well placed.

“Kelsey-Lee Barber [who won back to back javelin golds in Eugene] has become one of the best-ever athletes.

“We have got breadth, we have got middle distance athletes making finals which we have not got before.”

Faichney said sprinter Rohan Browning was disappointed with not making it past the heats in Oregon after making the semi-finals at the Tokyo Olympics and was confident of improving again in Birmingham against an elite field of Caribbean and UK runners.