Peter Bol rolled his ankle training at the track the night before his 800m heat and limped back to the athletes’ village. He didn’t know if he’d be able to race.

He got treatment and was surprised when he woke up OK. He then ran effortlessly to win his heat on Wednesday, so comfortable he was jogging down the home straight, powering right off. 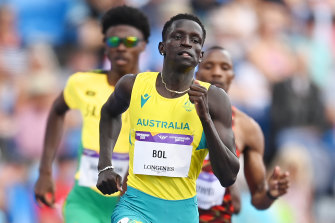 Peter Bol comfortably won through to Sunday’s 800m final at the Commonwealth Games.Credit:Getty

He was fluid and free, with no hint of discomfort. In fact, later he admitted it felt a bit easy.

“I feel good. A big shout-out to my medical team, yesterday I was limping on the way back, today I am fine, so that is a massive thank you,” he said after winning his race in 1:47:01, which was the quickest time of the heats.

“I wasn’t playing basketball, I just rolled it on the curb at the track. First time ever. I don’t really overthink [it], I just went back got some medical, iced it and it was getting better by the night and then in the morning ready to go. I woke up feeling good – the race speaks for itself. It was comfortable, it was nice.

“To be honest that did feel easy, I enjoyed that a lot.”

He said it was “awesome” to bounce back from the world championships last month, where he came seventh in the final, and be “in amazing shape”. 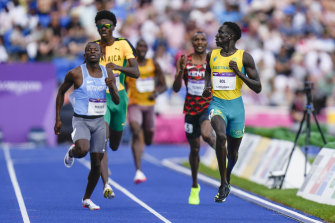 Bol checks out the competition as he glides through his heat.Credit:AP

Bol spent the year after the Olympics working out where to run. In Tokyo, he had run personal best after personal best to make the Olympic final only to be dudded for a medal at the line after leading from the front in each race.

It was thrilling but heartbreaking. At the world championships in the US last month he made the final, but his race fell apart in the final when it looked like he got caught out in between wanting to get to the front and actually being able to get there. He finished seventh and was disappointed.

Does he keep going to the front? What about trying hanging at the back and coming home strong? Yeah, tried that. What about sitting in the middle? But anything can happen in there.

Whatever he did, whether he went out the front clear of trouble, went to the back to kick home over the top, or got stuck in the middle with clowns to the left of him and jokers to the right, the results were the same. He’d finish top two or three.

In Birmingham on Wednesday morning in his first chance to compete since the world championships in Oregon he chose the front again, sitting on the shoulder of Kenyan Cornelius Tuwei, who had the quickest PB of anyone in the race. Bol won effortlessly.

He sat over Tuwei until the final back straight, when at the 550m mark he eased out, took the lead and quickly opened up a gap on the field. He was so comfortable, he was able ease down to a jog down the final straight.

“I always try and get a good start, hopefully not right at the front and not too far back,” Bol said.

“Everyone in that line has a fast time, it’s who can race tactically best and who is confident and my confidence is ahead of some of these guys. That’s what pulls me through. 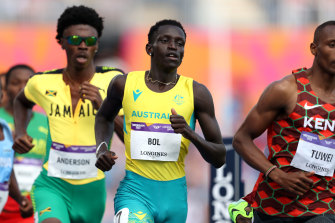 “On paper they are a lot faster. In a Diamond League race Tuwei would be very strong, most of these athletes follow a pacer and don’t have to think, they run 1:44s, 1:42s. But when it comes to a race like this that is tactical and unpredictable I have an advantage. My mental game is strong and I back it.”

Organisers have changed the schedule after a number of athletes did not turn up to Birmingham and so they removed the semi-final round that was due to be run Friday night and will instead move straight to the final on Sunday, which creates a long, four-day gap between races.

“I will get around the other sports and I will have a session in between, which has not happened before,” Bol said.

Charlie Hunter, a former NCAA champion from the US college system, pushed from the front in his heat but was overwhelmed in the home straight, finishing fifth in 1:49:94.

After a difficult year with injuries and a disappointing world championships when he was run out in the heats, Steve Solomon delivered a strong performance to finish second in 45:98s to advance to Friday’s 400m semi-finals.