High jumper Brandon Starc came within a whisker of posting an automatic Olympic qualifying height at the Sydney Track Classic on Saturday and feels his best is yet to come with Tokyo on the horizon.

The Commonwealth Games gold medallist cleared 2.30m with his final attempt to the delight of a vocal crowd on hill at the Sydney Olympic Park Athletic Centre. 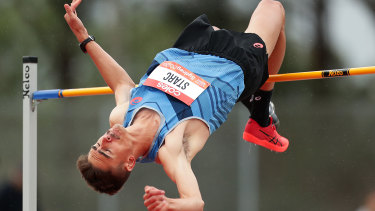 Brandon Starc in action at the Sydney Track Classic on Saturday. Credit:Getty

However, the Olympic qualifying mark of 2.33m was a fraction too much for the 26-year-old, who   finished ahead of Korea's Woo Sanghyeok (2.24m) and Malaysia's Nauraj Singh Randhawa (2.20m).

Despite falling three centimetres short, Starc will almost certainly be in Tokyo anyway as a result of the World Athletic points-based ranking system, in which he is ranked third and from which the remainder of the 32-strong field will be picked after automatic qualifiers.

Starc has a personal best of 2.36m but the 2.30m jump was a five-centimetre improvement on his result last week at the Canberra Track Classic, where he suffered cramps that he felt hampered his ability to go even higher.

“I’m pleased with 2.30, I can’t complain,” Starc said. “I had a decent attempt at 2.33 but it’s still early days. I wasn’t really hitting them to my capability. I think there is more to come definitely.

“Last week I cramped in my calf, this week I didn’t, so that’s a positive. I felt there was a little more there. I’m definitely above where I was last year.”

Starc made the high jump final four years ago at the Rio Olympics but finished last behind Canadian Derek Drouin, who won gold with a leap of 2.38m.

At last year’s World Athletics Championships in Doha, Starc finished sixth with a best of 2.30m.

With five months to go until Tokyo, Starc is pleased with how he is placed. While big clearances is what he is after, the mechanics of his run-up and how the jump feels is equally important.

“There’s plenty of time until Tokyo, but consistency is going to be my biggest thing,” Starc said. “I didn’t have that consistency in my run-up going into Doha last year and I had a bit of a back issue which prevented me from getting that consistency.

“I want to keep that momentum going and stay in one piece. The heights will come.”

In the women's event,  Eleanor Patterson and Nicola McDermott couldn't be separated for the second week in a row, with both registering 1.94m jumps.

After chalking up Olympic qualifying heights last week at 1.96m, the pair were unable to clear 1.97m, which would have been personal bests for both. Patterson finished first on a countback.

The Australian record of 1.98m is in danger of being beaten in the near future, while the magic mark of two metres is a big goal for both.

“These kind of heights, high 90s, who knows what we’re capable of,” said Patterson, who won a Commonwealth gold medal in 2014. “These heights are high calibre in regards to others in the world, so to be able to have this on home soil and get that practice in for both for us given what is to come this year is very exciting.”