Home » Athletics » Sauvage made me believe I could win gold, says de Rozario

Madison de Rozario has credited Australian wheelchair racing legend Louise Sauvage for instilling in her the confidence that she could clinch a maiden gold medal after executing her race plan to perfection to chalk up Australia’s first win on the track at the Paralympics.

After a disappointing fifth in the T54 5000m race on Saturday, de Rozario was able to put a “tactically terrible” race behind her to cruise to victory in the T53 800m final and put to bed any doubts she might have had about never making it to the top of the podium. 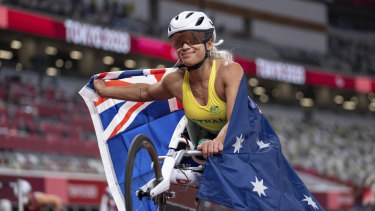 It came on a night when 20-year-old sprinter Isis Holt won her fourth silver medal across two Paralympics after once again being beaten by her Chinese nemesis, who demolished the T35 200m world record by over a second.
De Rozario made her move on the field with just under 400m to go from home and didn’t look back, clocking a time of 1:45.99, well ahead of China’s Zhou Hongzhuan.

It was a morale-boosting victory for Team Australia after a two-and-a-half day gold medal drought across all sports at the Games.

“The 800m is a simple race tactically. There is one decision you make – sometimes in the race – but days like today, my coach [Sauvage] and I made it a few hours ago,” de Rozario said. “You commit to it. There is no time to second guess it. Thankfully, my coach knows how to put a race together. She has done it for herself and for me. It was perfect, played to my strengths, and I’m really happy.“

Sauvage is one of Australia’s most decorated Paralympians and is in Tokyo mentoring de Rozario, who contracted transverse myelitis, a neurological disorder which causes inflammation of the spinal cord, at age four. 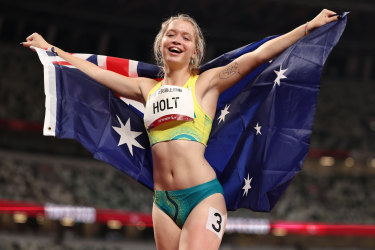 Isis Holt celebrates after taking silver in the T35 200m.Credit:Getty

“There is so much trust. That relationship is probably the strongest I have in my life,” de Rozario said. “She pushes me to be the best version of myself. She definitely sees my potential before I see it, and knew I could do this before I believed it.“

De Rozario has come close before. After three silver medals across four Paralympic Games, doubts began to crystallise in her mind. “Winning silver is usually my go-to at these Games. I’m notorious for it,” de Rozario said.

“This feels different to a world title and it feels nice to check this off. In sport, a lot of your identity quickly gets wrapped up in your results, which is unfortunate, but it’s what we lean in to and are encouraged to lean in to get the best of ourselves.“

Holt, meanwhile, added yet another silver medal to her tally, making it four second across Rio and Tokyo. The Australian, who has cerebral palsy, was in front at the halfway mark of her T35 200m event but Zhou Xia, who beat her in the 100m, came storming home to claim gold once again.

“Coming off that bend I felt like I got everything right that I wanted to get right and then, you know, the nature of cerebral palsy I think caught me off guard a little bit halfway down that 100m straight,” Holt said on Channel Seven. “But I feel like I hung on as best I could and I’m just trying to soak all that in.”

“If you’re not going to be the one breaking the world record or winning the gold medal, you might as well make the other athlete work hard for it,”

Another medal hopeful in Chad ‘White Tiger’ Perris didn’t get a great start in his T13 100m final and finished fifth in 10.84, outside Irish star Jason Smyth in 10.53.

Never miss a medal or great sporting moment with our Olympic update emailed daily. Sign up for our Sport newsletter here.