Jemima Montag won gold in Birmingham. That is the least interesting part of this story.

This is a walking gold medal that was born in the Holocaust, in the concentration camp of Auschwitz-Birkenau and others. 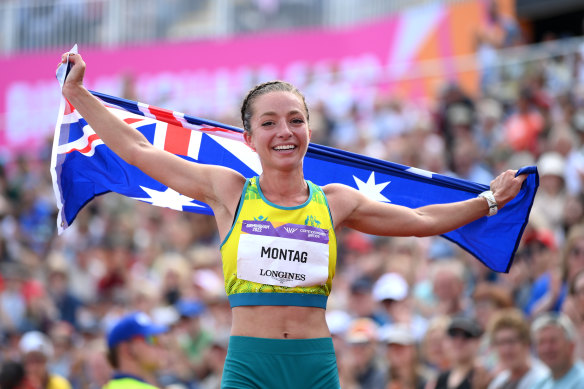 Every step of her 10-kilometre race-walking victory, Jemima Montag had a small gold bracelet clinking away on her wrist against her smartwatch. It was a cut-down necklace of her grandmother’s and a constant reminder, with each kilometre ticking over, of her grandmother’s sacrifice and the perseverance of her family.

The thought of her grandmother avoiding gas chambers and walking to freedom across ice with no food and barely any clothes made walking around a blue track in the Birmingham sunshine easy. 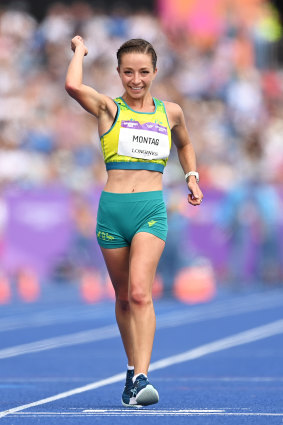 Montag thought of her late grandmother throughout the race.Credit:Getty Images

Montag’s grandparents were survivors of Auschwitz. Her grandmother Judith died last year before the Olympics, and in hotel quarantine Montag and her aunt waded through love letters and documents and uncovered more of the family’s extraordinary story.

“In some of her love letters and journal entries she wrote about just trying to make it through the next hour, the next day, hoping to meet her dad at the gate with a piece of bread. I think I take from that in a race that it is one kilometre at a time, one step at a time, not thinking about the finish line,” Montag said.

“Reading about a story called Death March, I think it was towards the end of the Holocaust, and walking through snow and cold for days on end in little sandals and hardly any clothing, and she [Judith] and her sister took their bands off and tied their wrists together, and they said, ‘We are getting through this together or not at all’.

“So visualising her walking on ice, not knowing when her next meal would be, or if she would survive. Yes, this is fun and something I choose to do, and yes, it’s hard, but someone just two generations ago had that level of strength and I know it is with me now.

“You just had to have a careful balance of taking risks and being a bit cheeky where it was possible – stealing scraps of food, running from one line to another if it meant not being put to the gas chamber – and then sticking by the rules when it was the right thing to do.”

Montag’s grandfather Richard was in the same concentration camps as her grandmother at the time, but the pair did not meet there.

“She was about 12 years old going into the camps, and they did not cross paths, and the love story which is really beautiful is that the war finished, everyone fled to different spots and he fled to Melbourne, she fled to Paris, married someone else and had a child but [her husband then] died of diabetic liver complications,” Montag said.

“So she is a widow, she has lost her sister, she has lost everyone except her father, and she is living in Paris with her six-month-old baby girl, and she receives this letter from Melbourne saying, ‘Hi Judith, my name is Richard, you have got no reason to trust me, but I heard from a friend that we went through similar camps and you are now a widow. Melbourne is pretty great, a land of opportunity and if you get on that boat I promise to look after you’. She thought, ‘I have had enough bad luck, what have I got to lose?’ And got on the boat. They married, she had my dad and his brother. I think what a beautiful love story.”

After that, who cares what happened in the race at the Commonwealth Games? That was only the end of the story, for the heroes of this gold medal are Judith and Richard, the grandfather Montag never met.

Montag had them in her mind and was happy and proud as she was able to walk her final lap knowing she already had victory assured. She had lapped nearly every other competitor and allowed herself the chance to enjoy the crowd and the celebration in the final lap.

She won in 42 minutes, 34.03 seconds and was given the gold medal for her efforts. But the real gold was a small bracelet on her wrist.

Get all the latest news from the Birmingham Commonwealth Games here. We’ll be live blogging the action from 4pm-10am daily.