Eight Australian athletes’ Olympic preparations have been thrown into disarray after the Queensland government banned Sydney athletes from joining the Australian team at a training camp in Cairns.

All of the athletes, including Olympians Steve Solomon, Morgan Mitchell, Anneliese Rubie-Renshaw and Commonwealth Games bronze medallist Nick Hough, are based in Sydney and planned to train and compete at the Australian team’s camp in Cairns this weekend. 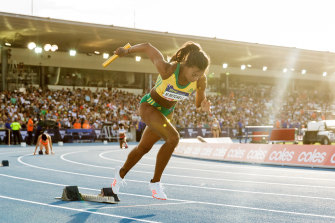 Morgan Mitchell is among the athletes based in Sydney whose Olympic preparation has been disrupted.Credit:Daniel Pockett

The Queensland government said all of the athletes could go to the camp but due to Sydney’s wave of COVID-19 infections they would have to isolate from the rest of the team, train alone and not compete against other athletes in trial competitions.

The restrictions meant it was pointless for them to join the team to do what they could more easily do in Sydney.

“Athletics Australia determined that it was more beneficial for these athletes to remain in their home training environment in Sydney and put in place support where necessary, to ensure they have access to training and heat facilities,” Athletics Australia chief executive Peter Bromley said.

They will now meet the rest of the Australian team in Sydney, where the team will depart for Tokyo.

Australia had organised the Cairns camp with races and competitions among domestic athletes to supplement for those who could not, or did not want to, go to Europe to compete ahead of the games because of the COVID-19 situation there.

Blundell ran in Rio but for the other athletes, Tokyo will be their first Olympics.